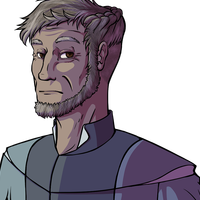 For  those that know Colonel Andrews in the service, he could be described  as a 'no nonsense' sort of person. Humor if often not present in his  speech and sarcasm is limited, even to the point where he often does not  acknowledge jokes. Outside of his work he's more relaxed, more open to  playful prodding though his humor can still be described as dried at  best.

He prefers to keep his work life and personal life as separate as  possible, despite the fact that his wife is also employed in the  military. He sees this as a means of keeping himself focused and capable  of making some of the more difficult decisions he could be faced with.  Attempts to pull him into jokes or pranks while in the middle of work is  often met with cold stares and dismissal.

Often when being met out of uniform the stark difference in his  demeanor and even the way he holds himself can make him almost  unrecognizable.

From  the time he was born, Nathaniel has been blind. It wasn't until his  early teens he started on a program to help his sight. Using a  government set program with the promise of his being involved in some  form of government employment once out of school, the experimental  procedure would be covered in full at no cost to himself or his family.

Over the subsequent years, the implants proved to be successful  enough that his eyesight was on par with anyone else. Because of this,  he decided to spend his required government employment in the service of  the Istrese military. From then, what had originally been just a few  years run, turned into a life-long career choice.