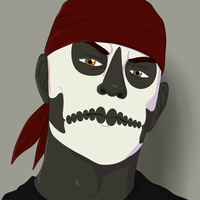 People who size him up, those who call his wrestling 'fake' or any wrestling fake, those who question his 'life choices' to drink and smoke, lazy people, people who mope about how sad they are, people who don't answer his questions

Commoners are here: The Commonplace

Lawrence lived in a trailer park with his mother and father. His mother was 16 when he was born, and his father 18. When he was two, they moved in together into a trailer at the park. From a young age, him and his mother suffered extensive abuse from his father. He was an alcoholic with a gambling problem on the weekends, and during the work week he was gone for long hours working in a steel mill. His mother worked at a clothing store right near the trailer park.
Oftentimes, him and his mother would go hungry as there would be no food or money on the weekends. Lawrence's father wouldn't share his paycheck with his mother and would demand his mother give him her money. This only happened during Lawrence's younger years, as his father aged, he calmed on his abuse and neglect, even if just slightly

From as early as junior high, Lawrence was a troubled kid with an attitude problem. He was as much a punk as any teenager, staying out late, getting into fights, smoking and drinking. He had his first tattoo at the age of fourteen that he received from an individual in the trailer park. He was arrested on multiple occasions for petty crimes, such as disrupting the peace and petty theft. Unrelated to his delinquency, he cared for his mother deeply, as she did her best for him. All his clothing came from her and the shop. Lawrence would steal from stores food for them and gifts for his mother, and for the most part, he was a successful thief. His mother hardly questioned him, even if the cops brought him home in handcuffs. Their relationship was strained, but caring.
Due to his delinquency and being 'late bloomer' (he was small and puny up until around the age of 16), was occasionally picked on at school, leading to fights and suspensions and declining grades. Lawrence had a knack for mathematics, but hardly utilized it.
At 16, Lawrence got a job working in a biker bar cleaning. It was a dirty job, but it was a job, and helped to feed him and his mother. He would still steal when he had the chance, to save money.
The bikers of the bar took him in quickly, because even as a cleaner, he was loyal to the bar and did what he could to help when needed. He quickly drew into the biker culture. The gang that ran the bar was known in his small Ohio town for having a local wrestling league, which, on top of following the AWA and future names of wrestling, Lawrence quickly became interested.

At the age of 18, Lawrence quickly began to finish his growing at the ripe height of 6'5". Though lean and not overly muscular, Lawrence was perfect built for wrestling. At this time, the biker gang officially welcomed him into their crew (after a fight with the leader), and he began to train with them and run the wrestling.
At 19, Lawrence's father left his mother for another woman, and she was left alone in the trailer, unable to afford it. Lawrence begins to deal drugs with the gang to help support himself and his mother, on top of still helping with the bar and running side wrestling show.
As a wrestler, his names were known as 'Big Bad Barone', 'Triple B', or '3B', 'B3', and occasionally just '3' or 'B' separately. He was popular, mostly because he was one of the larger wrestlers, and he had a knack for entertaining. He would sometimes sing in the ring between fights. As he trained, and he made money dealing drugs, Lawrence reached a good time in his life. His father was gone, he could care for himself and his mother, and he had little to worry about.
At 22, Lawrence was caught with possession of a controlled substance (somehow he missed intent to distribute), and was sentenced to 2 years in prison. The time was extended to 2 years and three months with bad behavior.
Once out, he gets right back into the gang culture, with more respect for not ratting anyone out. His is living in a homeless shelter, and with help from his gang, Lawrence moves his mother into a small apartment that was purchased by the gang while Lawrence was in jail. Her health is fragile as she develops lupus, and Lawrence tends to do more of his dealing out of apartment.
Things are simple for years. Lawrence deals, gets back into the wrestling as a heel, and takes care of his mother. He moves up in the gang and runs the bar. He's more careful about dealing, and somehow manages to stay away from the cops. He develops a heavy alcohol problem.
At 27, Lawrence ends up getting hooked on his own product. He heavily uses coke, and moves up to heroin. At 29, he catches hepatitis c, but won't know until he's 31. His wrestling career begins to deteriorate as his health does from extreme drug use. He begins blowing money on the drugs, leaving his mother without her medications. She doesn't say much to him about any of this.
At 33, he has to leave the wrestling gig as his liver begins to fail him with his heavy drinking. He begins to be able to deal less as he's doing product. During this time, his father comes to find him and his mother and demands Lawrence's mother comes with him for reasons unknown to Lawrence. His father assaults his mother, and Lawrence attacks him, with the scuff resulting in Lawrence killing his father as he cracks his head against the side of a table.
Afraid of the jail time and overall distraught from his health and his mother's health, Lawrence ghosts the gang and his mother and begins his run from the law. A warrant is sent out for his arrest. Through an old contact of the gang, he finds out his mother died shortly after he killed his father. The gang sends out a death warrant for him, too. All he has on him is a little bit of cash, two bottles of vodka, his cigarettes and some heroin. He runs for three long years throughout Ohio, never leaving the state, and does odd jobs. He takes no meds for his hepatitis, and his health is gone. At the age of 36, he is staying in a motel when an anonymous tip tells the police he is there. He ends up in a stand off with the police, having taken the front desk clerk of the hotel hostage (though he knew himself he wouldn't actually hurt them), and before the stand off ends, he dies from intense alcohol poisoning, having drank heavily right before and during the standoff.
And hence, begins his time into the Commonplace.

Life as a Commoner: TBA