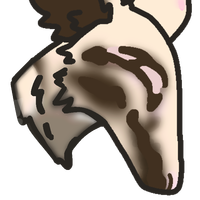 (Feel free to pm me about adding one of your chars to this list!)

Unknown for sure, estimated as some sort of opossum-dragon

Bubbly, quite sweet if you get to know her. She is quite sassy, but her compassion can snap her into it.

Ashe Has the body form of an opossum, and has very short fur. Her ears are abnormally large, and she is a creamy pink with deep dark chocolate stripes. Her tail is a warm grey with creamy pink stripes, she has a few spots that are the pink color as well. Her head is larger towards the ears, and gets smaller towards the front of her face. Her face is skull-like, having no eyes, and and odd nose. She is slightly bigger than the average timberwolf.

~Peaches; she loves them, and they give her strength.

~Friends; she needs them now, more than ever

~Hugs; she loves snuggles and hugs, her fur is very short so they keep her warm.

~Her teeth; they are sharper than knives

~Her tail; full of rock-hard bones, and many joints, you won't want to get slapped by this tail!

Bullets; her skin is just as thin as her fur, leaving her exposed to bullets and other sharp weapons.

Anger; it gets the best of her sometimes, causing her to hurt people.

Any predators larger than herself; A lot

Around 17 in her years