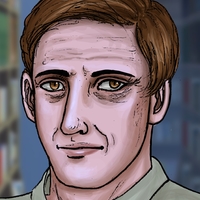 Ardalion Ivanovich Mayakov was born in Tver, Russia, in 1872. He is an anarchist bookseller and owner of the bookstore, "Ardalion Books and Gifts," which is located right across from Harvey's Feingold's deli.

A womanizing, self-declared "agent provocateur" who enjoys riling people up and challenging social norms, Ardalion is a nihilist of the highest order. He dislikes the traditional order and just as in Russia, he seeks to challenge the "traditional" hierarchies of class, race, gender, religion, etc. that he sees in America.

He takes a special interest in bored, disaffected middle-aged women who are dissatisfied with their lives, such as Raisa.

Ardalion knows Lev since they are both part of the Bowery Labour Union. He feels that Lev is not daring enough and that he's too afraid of chaos to really be able to push for the changes that he claims to want to see in society.

He immigrated to America after the failed 1905 Russian Revolution. This Revolution reached a bloody climax in November and December 1905 with the bombing of the Hotel Bristol in Warsaw and the Cafe Libman in Odessa. As Anarchist centres began to be raided by the Tsarist police, some fled to Western Europe and America.

Ardalion first fled to London in 1906, where he stayed for two years, before settling on the Lower East Side in New York City in 1908.

Ardalion is around 172 cm tall.