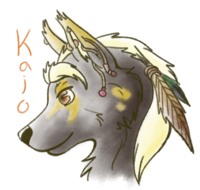 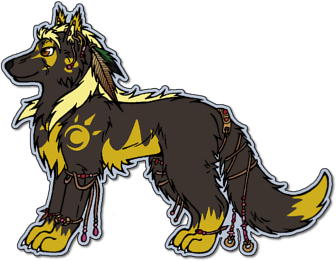 Aamunkajo is kind, caring, talkative, optimistic, trustworthy, naive and bad at saying no. Respects her tribe's old customs a lot and tries to see good in everyone. Knows some herb medication.

Aamunkajo is a small coydog with short legs, brown and yellow fur, a mane and tufted ears. She wears a lot of ceremonial jewelry all around her body. Her orange eyes have a peculiar clouded look, but despite that they work just fine. She is 40 cm high and weights 10 kg.

Aamunkajo was born into a North American canine tribe called Tasangon heimo. She was the only one out of six puppies to come out alive from the difficult labor that also left the mother in a really bad shape. The mother never quite healed from the experience and it didn't come as a big surprise to anyone how she after six months passed away. Kajo, who had been mainly raised by her father, wasn't too devastated by her loss, though. She was anyway too busy trying to learn everything about Maan laki, a collection of old customs and rules of her tribe, to put a lot of time into mourning. After another seven months Kajo had a dream that among the tribe was interpreted to be Vaelluskutsu, a call of wandering. She was supposed to leave her home to seek whatever life wanted her to seek and that's what she did. During that journey she traveled to Andriaana.

In the island Aamunkajo joined the pack of Befalas, made a lot of friends and discovered several things about the world as well as herself. Not every canine was as kind and considerate as the young female, but despite that she refused to let go of her sunny outlook on life. What did make her quite nervous though was the fact that she managed to develop a crush on her best friend, a larger female named Revontuli. She had never heard of same-sex couples before, but after a lot of pondering and talking about the subject with others she finally came in terms with her feelings and confessed to Revontuli, who fortunately felt the same way. They became the happiest couple one could imagine and started to look for an orphaned or abandoned puppy they could raise together.

Not everything went as the females had hoped, though. Revontuli was forced to join Lahko, a shady religion of sort, and she was beaten up several times by canines opposing the said faction. Aamunkajo on the other hand had to go through some rutheless mocking thanks to her sexuality. On top of that time went on and neither Kajo nor Revontuli seemed to hear anything from any puppies in need of new parents. Revontuli's biological clock started to tick so furiously she eventually got herself pregnant, which of course was a bit of a shock for Kajo. As an endlessly patient being she did of course forgive her mate sooner than later, and so they finally had a family of their own... For a while. A member of Puolikuu, a family that furiously opposed Lahko, found them and mercilessly killed every last one of the puppies after learning Revontuli was part of Lahko. The mother was nearly killed, too, and both of the females were absolutely bereft because of their loss. After Revontuli was physically healed enough the couple decided to leave Andriaana behind, as it clearly wasn't a habitat suitable for them to live in. They swam away and Kajo lead them back to her old tribe, where they were welcomed to continue their life in. That they indeed did, and lived among the tribe for the rest of their lives.