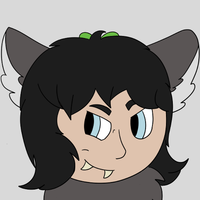 "Victor" is devious imposter who uses cunning and his silver tongue to get away with his murderous tendency. He often will pretend to help crewmates for quite awhile before turning on them and betraying them. Because of his approach, he often isn't a suspect until to late, unless he gets to impulsive or miscalculates something. Due to his style, he often clashes with his fellow imposter Maggie, who would rather just run around wild and take out the crew without thought. Sometimes the two fight over seemingly nothing, and this can lead to a vote push by one of them, but often they just fight out of the eyes of the crew. Victor especially doesn't understand Maggie's fascination with Maddy, but he does share Maggie's dislike of Mitzy, who he views as a threat.