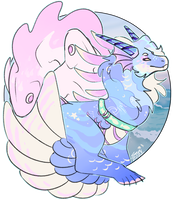 Was pushed by her father from a young age when her familiars manifested to best everyone. She was repeatedly told that if she wasn't on top then she was worthless and this was further enforced by him only giving her attention when she had done a major accomplishment or worse punishing her for failing.

Failure became something she couldn't accept from herself and so ingrained that even the simplest things became contests. She had no true meaningful relationships as ever friend was chosen to increase her standing and her partner for the accomplishment of dating another powerful Runicwing. Ever interaction was a careful dance to make everyone like her and admire her. There was no one who she truly loved or trusted. Surrounded but utterly alone.

One day a competition was announced. It would be a contest of abilities and popularity. Whoever was voted most would be 'crowned' king/queen for a festival. Pisces was the most likely to win. However a common runi was showing surprising expertise in potions and many people felt for her bc she had grown up an orphan. Her father doubled down on her until her sole focus was winning. She exhausted herself showing every impressive spell in her arsenal and pushing herself hard to compete taxing and complex ones. Her tunnel vision cost her her 'friends' and partner who drifted away as she spiraled.

eventually the day came when all the votes were cast and a winner announced. Pisces stood nervous in the crowd with her father a cold presence beside her as they waited. Then the common runi was declared winner. While all the others cheered for her and the proud runi went to take her crown, pisces father leaned down and snarled that she had failed. He told her that she wasn't his daughter if she couldn't beat a common runi with the power of a mythical familiar on her side. How useless and undeserving of life she was if she couldn't be crowned queen.

Pisces finally snapped. Her mental health was already frayed to pieces and this was the final blow to shatter it. She WOULD be crowned queen. She was the only one DESERVING of it. It was a simple matter of taking what was her's. Summoning her two familiars pisces flung herself up onto the stage at the common potions runi. It was easy to kill her and the other surprised runis on stage. Pisces placed the crown on her head and held the bloodied roses happily. Anyone who tried to fight her was killed near as quick. She was after all the best of them. Her father's horror wasn't even registered in her delusion pisces truly considered herself the beloved queen getting rid of rebellious and hateful traitors. Her father's death was slower. He drowned in a bubble of water. The rest of the villagers either fled or were mercilessly slaughtered. Leaving pisces to dance to her imaginary music and surrounded by corpses who she percieved as happy subjects cheering her on.

poor gal eventually does get found and helped. She is still incredibly unstable but no longer quite as homicidal.