Myrseros is the fifth planet in of the binary star system Vahrsykr. Being relatively far from its two suns, Myr'seros is a frigid, icy planet whose surface is covered in snow and ice for many months of the year. However, greenhouse gas-driven climate change has warmed the planet considerably, leading to increasingly large losses in snow cover and rising sea levels.

The main landmass of Myr'seros is the supercontinent Tahr'rihc, which is dominated by the Zyrsitian Range and its surrounding highlands; lowland areas only exist at the coasts and the far western regions. In the pre-industrial era, the world ocean had been ice-capped year-round, with equitorial regions having patches of ice-free water that expanded during the summer. Nowadays, the equatorial ocean is completely ice-free, even in the winter, leading to acute sea level rises. Much of the coast has already disappeared under the rising seas, pushing many species further inland.

A wide variety of organisms live in the various terrestrial and oceanic biomes on Myr'seros. The most prolific and dominant of the Serosian species are the Ferah-saar, a group of bipedal repitilian humanoids that can be found in most, if not all, terrestrial regions. Previously, the Vaelyk-saar had been the only species who could be found in all terrestrial regions, but their range has been drastically reduced because of over-hunting and habitat loss. Overall, Serosian biodiversity is on a steep decline - as much as 60-65% of all species on Myr'seros have gone extinct in the past few centuries and many others are considered vulnerable or endangered.

Topographical map of Myr'seros showing the locations of well-known landmarks. 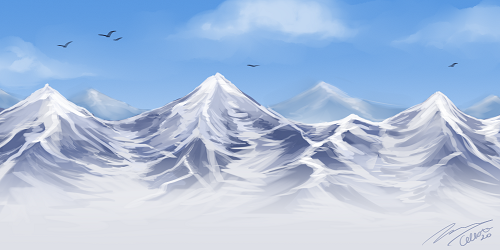 Named after the Zyrsit, the highest deity of Sa'haar'syk, the Zyrsitian Peaks are a great mountain range that encompasses most of eastern and southern Tahr'rihc. Many of the mighty rivers that flow throughout the land, such as the Eternal River, originate from the meltwaters of the Zyrsitian Range. The ancient temple of Zyrsit is said to be located somewhere in the Artesian Crown region, but the exact location is still unknown. Despite the large area the Zyrsitian Peaks cover, only about 50% of the range has been mapped or explored. The unforgiving slopes, covered with hidden crevasses and sheer drops, have killed many brave explorers and deterred hundreds more. 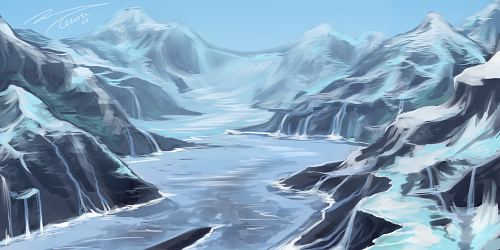 The Artesian Crown is a region in the central Zyrsitian Peaks where most of the rivers of Myr'seros originate. Snow and ice accumulate in the region during the winter and melt during the spring, creating the headwaters that will fuel the Serosian rivers until the next year's ice melt. Water that comes directly from the Artesian Crown is sold at a premium, as traveling there involves hiking for days in the Zyrsitian Peaks.

Ferah-saar, regardless of their religious beliefs, consider the region sacred, for life on Myr'seros would perish without the rivers that flow from the Artesian Crown. However, the volume of the ice sheets in the area has heavily decreased in recent years, leading many to worry that the rivers may dry up for the first time in recorded history. 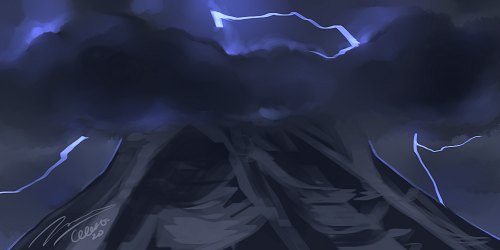 The Observatory is the highest mountain on Myr'seros, whose original name has been lost to history. It is located in the Tahr'saar'rihc's Spine region of the Zyrsitian Peaks, but it is rarely seen due to the storm clouds that frequently form in the area. On clear days, some Ferah-saar report seeing a strange structure near the summit. It is said that Vahrtiis, deity of stars and light, resides at the very top of the mountain, where xe can be closest to the cosmos.

The Observatory has never been scaled before due to its steepness, unpredictable weather, and thin air; even the Vaelyk-saar avoid flying near its slopes. It is considered taboo to depict the summit in images or to take photos of it. 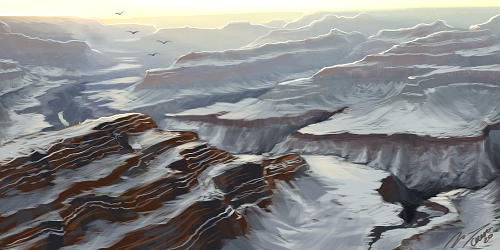 The Winding Scar is a vast canyon system carved into the Wekr Plateau by the Eternal River. Legends state that Zyrsit created the Winding Scar during xer battle with Faetrihc, xer claws digging into the earth to prove the dominion of water and ice over rock. The rim of the canyon is almost two miles higher than the base, resulting in the emergence of several distinct biomes based on altitude. It used to be a rite of passage for Ferah-saar living near the Winding Scar to descend and ascend the entire height of the canyon, but nowadays the trails are only walked by those seeking a physical challenge.

Strong thunderstorms plague the Winding Scar during the summer, often forming quickly and without warning. These storms and the precipitation they bring often leads to flash flooding inside the canyon and further downstream. Those seeking to visit the bottom of the Winding Scar typically go during the spring and fall to avoid the storms. 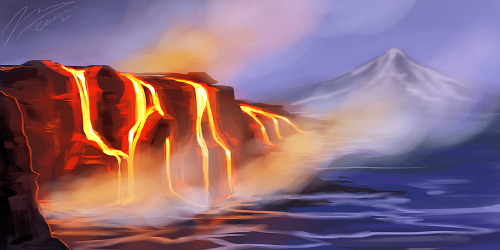 Fahlarxhae is a volcanic island to the southeast of Tahr’rhic and the largest island of Faetahran Archipelago. Unlike the other islands of the Archipelago, Fahlarxhae is largely uninhabitable due to the constant eruptions of its main volcano, Faetrihc’s Rage. Those who have explored the island have described it as a "scorching hellscape" due to the unrelenting heat and pervasive lava flows. Not even the sea life is entirely safe either, as the ocean temperatures are near boiling where the lava meets the water.

Despite the dangers associated with its tectonic activity, Fahlarxhae remains a popular tourist destination due to its unique black sand beaches and complete lack of snow. Visitors are advised to keep close to the shore and to carry ice packs in case of heat exhaustion. 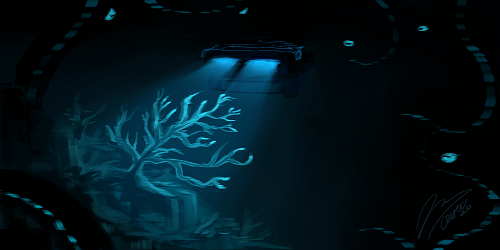 The Enlightened Depths is an underwater trench system located north of the Lyvtiil Islands and the deepest known area on the surface of Myr'seros. The maximum depth point, estimated to be somewhere in the eastern portion of the trench, is known as Seitziil's Illumination. Some Ferah-saar believe that there is a vast library hidden in the Depths, which contains all the knowledge that Seitziil has accumulated from the Void.

Not much is known about the biomes and organisms that exist within the Depths. The thick surface ice and the crushing pressures below make it excruciatingly difficult to send observation probes down far enough to reach the bottom; however, scientists are certain that unique life forms subsist in some form down in the Depths. 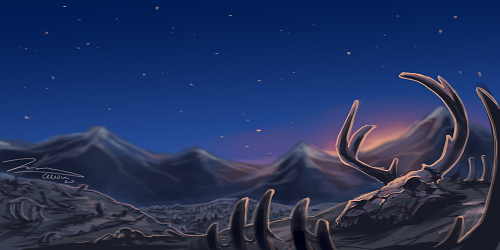 Saar's Rest is a giant boneyard nestled in the southwestern Wekr Foothills. For whatever reason, the creatures of the Wildwoods all flock there to die, leaving behind carcasses in various states of decay. Scientists believe that the secluded nature of Saar's Rest makes animals feel safer, but the constant presence of dead organisms seems to counter that idea. Special types of "corpse plants" grow throughout Saar's Rest, presumably due to the nutrient-enriched soil.

Saar's Rest is a heaven for anyone interested in bones, as well-preserved skeletons are often available for the taking. An entire industry for cleaned bones has sprung up in the area, and a vast majority of the Xheiyeran-themed accessories being sold throughout Myr'seros originate in some way from Saar's Rest.