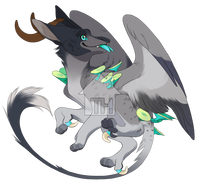 "Ringbearers are Ancient forest gods that roam old and new graveyards. Getting their name from their behaviour of digging up graves and prying coffins open with their hooked dewclaws, often times stealing any jewelery off the unfortunate skeleton. They are sometimes viewed as a bad omen, and there are many myths that claim seeing one at night means you will soon die. Some legends also portray them as peaceful guardians that guide both lost spirits and the living to safety.

"Bearers are omnivores, and their diet usually reflects in how they look. Fish diets lead to aquatic features, plant diets lead to more plant growths on the body. Although some Bearers will eat jewelery or metals to enhance their beauty, if they consume enough their claws or teeth may turn to mineral instead of bone. Some individuals become consumed with greed and may eat so many shinys that their skeleton will eventually grow crystals, these will slowly begin to jut out of their skin, and can occasionally become so severe that it incapacitates the Bearer.

"Ringbearers are immortal! And instead of bleeding, plantlife instead grow from their wounds (or crystals if the diet contains enough minerals). You may frequently see 'scars' on Bearers that have grown into flourishing plants over the years."

Heblep is a surprisingly urban ringbearer that is curious and playful by nature.
Often they licks things first, which could get them into a lot of trouble.
Aside from the random licking, at least they're keeping the pigeon population down.