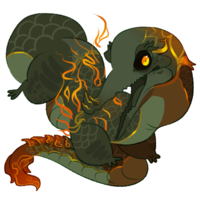 old as balls, appears to be mid/late 30's as a human

The King of Crocodiles! (Or...you know...the only doctor in Phichit province...)

Lord Chalawan was a large, powerful and aggressive crocodile who lived with his cohort in an underwater cave in the town of Phichit...

It's an old piece of folk lore... The king of crocodiles who stole a rich man's daughter and was slayed by a man named Krai Tong.
But what if I were to suggest to you that Krai Tong and Chalawan were the same person?
Lets take another look...into the tale of Krai Tong and the Crocodile King.

Once upon a time, following the end of the second world war...

Thailand fell under the rule of a dictatorship. The country delved into a time of political upheaval and worrisome turbulance... But further away from the capitol, life continued mostly as it always had.
To escape from the quaking instability that recently plagued Krungthep, Krai Tong travelled south in search for work and a quieter place to live. He wasn't on the road for long, before he came across a humble township in Phichit province; and there he made a living practising medicine as the Province's only avaliable doctor.

This is his story, and he's sticking to it.
To his credit, it's well researched. Speaking to him, you'd never for a second doubt that he'd lived most of his life in the capitol city. You'd never even consider the fact that Krai Tong had spent decades...perhaps even centuries, living in the large river that the town is built on. You'd never entertain in your mind, the possibility that his native form is that of the monsterous crocodilian creature who'd become an infamous legend among the locals as a serial abductor of women. And, upon being met with his generous humility, you'd never know that he was a revered King among beasts.
This was certainly true of the man who entrusted his daughter's health to him.
Even when his daughter went missing, reportedly kidnapped by the great and terrible Chalawan, he never once suspected that the good doctor was the one behind it all.

As for the daughter, Taphao Gao, she'd never been happier in her life. After all, it was she who approached the crocodile king for a way out of her home situation. But she too did not expect that the doctor, for whom she had developed an infatiation, was the same as the gigantic, princely beast who obliged to whisk her away.