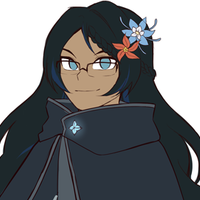 Jackie is a special event NPC who spawns randomly in very hard-to-reach places. She doesn't have a Vision, but that doesn't stop her from exploring weird places and collecting as many resources as she can!

If the Traveller chats with her, the Traveller locks themselves into a conversation where Jackie will test your hoarding skills by asking for 10 of a local specialty from outside of the nation you’re currently in. The Traveller must already have those items in their inventory at the time of the request.

If they do, Jackie will reward the traveller with exactly 160 Primogems. If they don’t, the opportunity to grab the Primogem reward is cancelled until the next random encounter. Instead, Jackie marks the location of a treasure stash on Traveller’s map so they can visit it and “stock up to be better prepared next time.” Upon visiting this location, the Traveller can select one mystery bundle filled with various rare materials.

her full name is jacqueline, don't call her that tho.