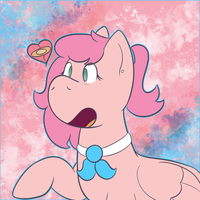 Mendy Heart is a young, easily excitable yet socially anxious mare, her passion is therapy and she loves helping anypony she can, sometimes to her own detriment. She loves her partners and her friends, and is always there for them no matter what.

Mendy had a bit of a rough foalhood, to put it lightly. She knew from a young age that she was a filly but learned very quickly that ponies like her are not only shameful but often forced to hide who they are, unable to fully suppress her gender she often struggled with being teased and more often being bullied and harassed, usually verbally but sometimes physically. She often would try to hide herself and blend in as much as possible with little luck, and it only proved to make her more depressed, eventually deciding to just fully cut herself off from other ponies and isolate herself in her room as much as possible, at least there no one could hurt her again. She unfortunately has very few happy memories of this time, and the ones she does have often relate to when she was allowed to be a little filly, or find comfort in being included with other fillies. She also struggled often while living in cloudsdale as she would get sick anytime she would peer over the clouds, adding to her long going fear of heights.

Due to her fear of other ponies, in part due to them not recognizing her for who she is, she was very late to getting her cutie mark, it not appearing until she was a teenager, which often was another source of ridicule. Around the time she just became a teenager she stumbled upon other ponies like her, and learned about “transgender” ponies for the first time in her life, this immediately became something she latched onto and knew finally described how she felt, unfortunately that doesn’t mean it was easy for her. Due to already being teased for acting too much like a filly as well, a filly, she quickly became terrified of the thought that she was in fact really female and tried on several different labels in the process before coming to accept it, eventually with the help of some close friends she was able to accept herself for exactly who she is. Mendy eventually was able to make friends as she got a better idea of who she is, because now she could really be herself around them, and those who embraced her helped her immensely, which in turn helped her learn more about herself. This cultivated in her finally getting her cutie mark, long after everypony else got theirs but no less important. Mendy was always very caring of her friends as she never was able to make very many, and would also help them with their problems talking to them, being there for them and providing them shelter when needed. Her cutie mark appeared after one particularly rough instance where she was able to talk to a friend going through something similar to her and help them feel better and cope better with the situation, she was so happy to have helped that she almost didn’t notice the mark on her flank appear!

After getting her cutie mark is when her love for helping others, especially through communication and therapy, sprung forward. She wanted to help everypony that was in a situation similar to herself, and no one should have to go through those things alone or without at least someone to talk to, and so she set forward on making that a reality. To accomplish this she moved to Ponyville, which had the added benefit of letting her keep her hooves on solid ground. At the same time, she was able to finally have access to HRT and transition, and finally feel at home in herself. Mendy does everything she can to help those around her, all the while learning how to better help herself. She’s not perfect, and sometimes she even messes up the same things she teaches others, but she’s learning, and she’s gonna’ be ok.