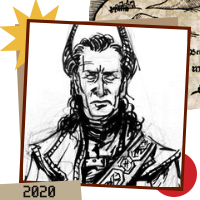 6'0 without horns, strong and slightly soft

I place no stock in wealthy or well-mannered folk. Money and manners won’t save you from a hungry owlbear.

Nobody should have to die as a result of someone else’s arrogance.

Survival. Life is like the seasons, in constant change, and we must adapt or die.

• I’m somewhat spiteful, and will happily leave others to their mistakes if they insist they know best.
• I proud, jealous and cruel.
• I value power and beauty above all other things.

Alin is the resident hunter and trapper of this little pocket of Icewind Dale. He knows every inch of this region and how to live off of it, and does his part to keep the locals safe. He offers armed escort for travellers between towns and hunts game to feed his community. He occasionally faces issues with other rangers, from neighbouring towns and from further afield, but for the most part, he lives a quiet life. When he isn’t travelling, he can usually be found nursing a drink in the corner of a tavern, swapping intel with other rangers and generally keeping watch.

For the last two years, the Dale has been suffering an endless winter called the Eternal Rime, trapping its inhabitants inside. Alin Hávarður has recently been seen travelling the Dale with a wizard by the name of Madlen Willoughby (human, 18), an enterprising young woman with the lofty goal of ending the Rime once and for all. The two have quickly become the subject of countless rumours across the region, and tales of their near-death experiences needn't be exaggerated.

Born and raised in Bryn Shander by his loving mother (Mishann, tiefling priest, 74) and father (Vragi Hávarður, Reghed human blacksmith, deceased), Alin was a restless boy and frequently joined his father on trips to other towns. By the time he was 17, he and his best friend Markham Southwell (human, 2 years younger) had undertaken a few adventures on their own, both with and without their parents' approval. As the pair ventured further from home they found themselves in all manner of perilous situations, which Alin typically relished and Markham mostly hated. In general, their days involved exploring the wilderness and travelling between towns, earning their keep through hunting, escorting and other odd jobs.

At 20 years old, following a year of strife due to an ill-fated run-in with the Zhentarim (a shady criminal organization), Alin was nearly killed by a mercenary called "She-Wolf". The ice beneath her shattered as they fought, and she was plunged into freezing cold water. Alin fished her out, saving her life, and she fled the scene. The mysterious stranger returned the favour when he and Markham found themselves outnumbered by gnolls a few months later.

Having more-or-less left the Zhentarim, Kareen 'She-Wolf' Wolfsblood (human rogue, 2 years older) joined the pack. Being from outside the Dale herself (and ill-disposed to the climate), Kareen encouraged Alin to travel abroad. Markham joined them on a few outings but ultimately disapproved of her in every regard, and responsibility tied the aspiring city watchman to the Dale more as the years went by.

When Alin was 32, he and Wolfsblood received a tip about the Dark Duchess, a pirate ship carrying cargo north from Luskan (just south of Icewind Dale). Being familiar with the area, Alin took a job guiding her through the ice, while Kareen found her own way in. Unfortunately, the weather turned unexpectedly, and the vessel got stuck in the ice. Everyone abandoned ship save for Captain Rudolph Bluemoon, who insisted that any deserters would forfeit their share of the treasure. The fleeing crew got caught in a blizzard along the way, crossing a part of the icy wastes with no flora or fauna and with no equipment. Alin came out the sole survivor, after being forced to eat the flesh of his dead crewmates.

Alin doesn’t recall what happened after the blizzard hit, only that he and his friend set off holding hands, then he awoke days later in Dougan’s Hole with only her hand. A resident of Dougan's Hole, Edgra Durmoot (human fisher, 12 years older), took him in and saved him from the brink of death - often against his will. He spent the next few years as a hermit, barely sustaining himself, but eventually started taking part in the community as their resident trapper and guide. Kareen’s hand wasted into nothing, but he wears her ring on a necklace underneath his layers of clothing.

This is where we started playing from. I'll type up these notes soon. It'll be so cool

This is where Alin died from slaad-related injuries.

This is where Alin killed both his lifelong friends and became Auril's chosen.

Alin has always been a quiet type, preferring to observe from the shadows and only speak when he has a good reason to. Because of this, he’s generally regarded as a mysterious and sage individual by most, but a few have gotten to know his more foolhardy side over the years:

Markham Southwell
Critical and wary friend from Alin’s youth in Bryn Shander. (human fighter, 46)
Enjoyed travelling with Alin but was always the more straight-laced one, and hated finding himself in avoidable scrapes every time Alin fancied it.
After many years acting as Alin’s voice of reason, Markham ran out of patience when Alin took a job aboard a pirate vessel heading North in the peak of winter.
Markham has recently taken the position of Sheriff of Bryn Shander and reconnected with Alin in his travels.

Kareen Wolfsblood
Rebellious, happy-go-lucky, fast-talking mercenary. (human rogue, deceased)
Alin met Kareen while visiting Easthaven when he was 20 and she was 22, and they often travelled together. Kareen always got them both into trouble, but also got them into a lot of fun.
12 years later, Kareen convinced Alin to take a job aboard the Dark Duchess, guiding her through the sea near Icewind Dale. She was also the first off when the ship got stuck in the ice.
Alin doesn’t recall most of what happened when the blizzard hit, only that they set off holding hands and he awoke days later in Dougan’s Hole, alone, on the brink of death, with only her hand. He spent the next few years as a hermit, barely sustaining himself, but eventually started taking part in the community as their resident trapper. Kareen’s hand wasted into nothing, but he wears her ring on a necklace underneath his layers of clothing.

Mylbor Tafferac
Proud, monster-hunting human fellow from a neighbouring town. (human ranger)
A mountain of a man, Mylbor seeks fame and fortune for his exploits and is under the impression that Alin also wants this - he wouldn’t have been far off some 20 years ago, but even now the man sets off Alin’s competitive and spiteful side.