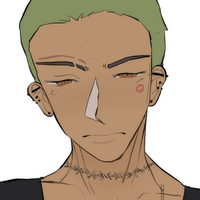 American Disaster
Part 2, Splendour & Despair: Into the vortex of everything, nothing, and between it. 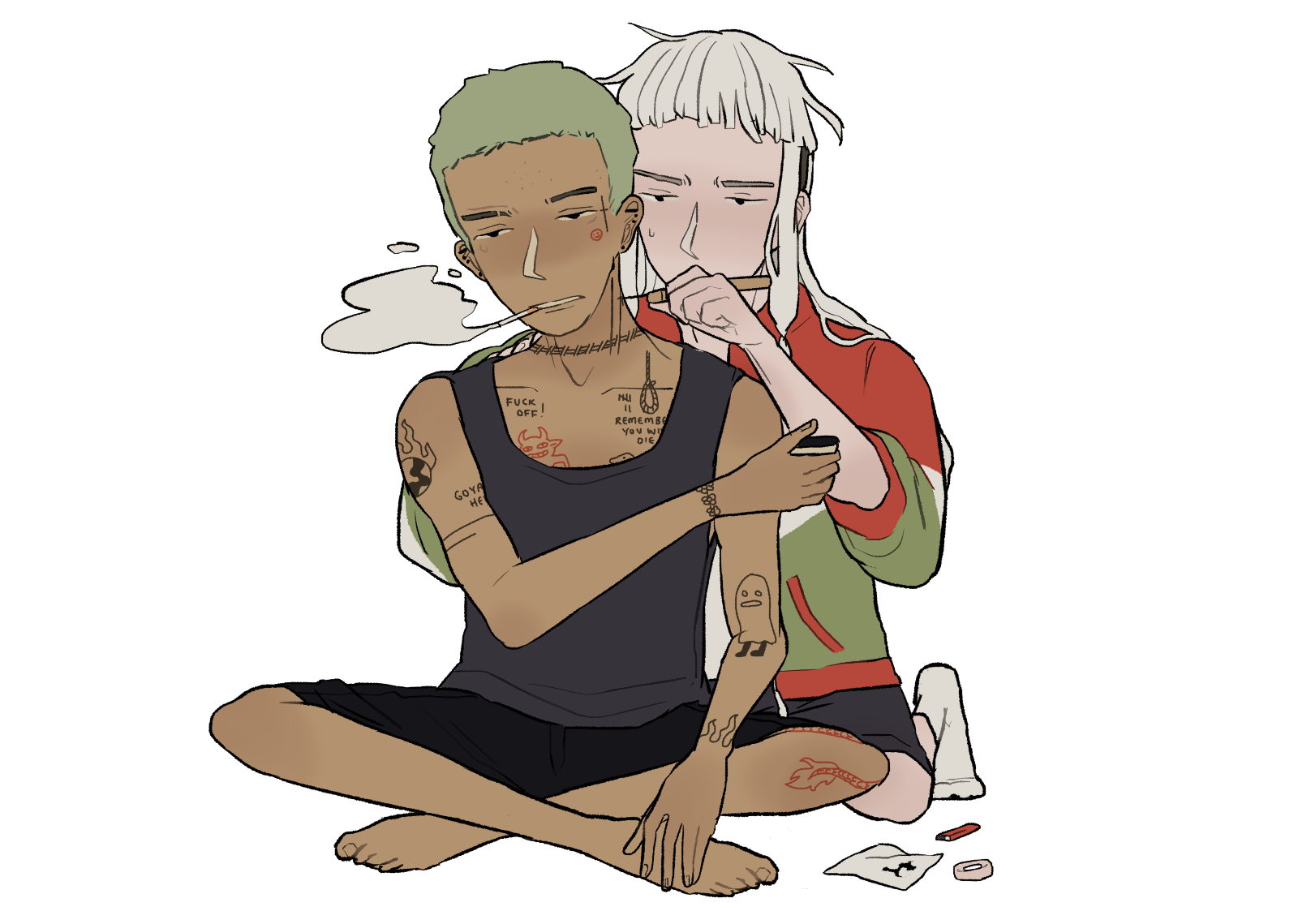 Michelangelo Romano, better known as Mike, is a drug dealer in Everton, recognizable by his tattoos and snide personality. He's hostile to most, softening only at the slightest amount with those who are familiar with him. It's difficult to tell whether Mike likes you or not; he seems to have his own way of doing things, with disregard as to whether he'd be seen as favorable while doing it. He's roommates with Olivia Spruce and Silas Dean, whom he'd known since high school—and recently Tony Blanco, whom he has a complicated relationship with.

Mike is born in Everton to a mostly-broken home, hooping through different foster homes before fleeing the system the first chance he had with his two friends, Olivia and Silas. His rocky upbringing has shaped the man he is today; a haggard dealer who samples his own merchandise, leaving relationships when they'd just about bloomed, using others as he sees fit. He knows more than anything he's nothing short of an asshole; he simply chooses not to change. But that's really the most of what others know about Mike—there's no telling what he truly thinks of anyone, or anything. Mike seems to live his own world, with his own rules; his friends had gotten used to it. To others—he comes off as inconsiderate; condescending even. The fact that he doesn't speak often doesn't help; he doesn't speak unless necessary, sometimes going for days—weeks even—without speaking to others.

He’s often referred to as Mr. Switchblade as a running joke that his name is unknown, as he’s too quiet to introduce himself, relying on his friends to name him for others, leading others to nickname him with a placeholder name. Mike carries a switchblade with him at all times and often fidgets with it, and hence the resulting nickname.

Mike Romano's solutions to any problem are provided by his fists.  Despite his hostile, cooled look, Mike is mostly made up of hostility—as a result, he's picked up numerous fights, having his own shares of wins and losses. He hasn't softened for anyone, and doesn't intend to; at least, when he does, it's never meant to be. He's rather secretive of himself, and is the type of person to come and go uninvited. He's seen as untouchable to most; and hence, when he's being inconvenient, there's not exactly a person who has a heart to tell him he's being rude.

Mike displays just about three emotions: boredom, venereal interest, or intense anger. His quietness makes his anger explosive, often becoming destructive at the height of his rage, only calmed by others letting him cool off on his own time. His only real vulnerability seems to be limited to sex, literally only letting himself be vulnerable if he was exchanging pleasure with another person. He doesn't want to seem to change, or become somebody else—it's hard to know whether this was a good thing or not to Mike. He's seen just about everything—splendour, despair, the lowest of lows and the highest euphoria; maybe that's why he hasn't been excited in a while.

Well, except, maybe that boy Tony he's been fucking with for a while.

Mike's facial expression does not soften at any circumstance, even when he's actively trying to look sympathetic (at the rarest occasion, anyway). He has tan skin with cold undertones, mostly discoloured throughout his body, as well as light acne scars on his face in general. He's rather intense to look at, even to his closest friends; his brown eyes seem to glare through people, as if he's trying to melt them away. Despite his lean, almost depraved appearance, Mike packs strength in his fists—his knuckles are lighter than his hands as a result, from answering with violence. Numerous tattoos dot his body, mostly stick and pokes. He has a buzzcut, often dyed green. He has a split in his right eyebrow, and has various scars across his face as a result from various bar fights.

Tony Blanco
It's hard to describe Mike's relationship with Tony—the latter would call it "friends with benefits", but Mike seems so peculiarly possessive with the other, burning with jealousy every time Tony converses with other men of interest. While Mike doesn't reprimand him for it, he strangely turns a cold shoulder to Tony every time the other spends time outside of Mike's circle—leaving Tony confused, since Mike seems to display interest towards him only if sex was involved.

Olivia Spruce, "Goya"
Mike's roommate best friend since childhood, Goya is arguably the only person who knew Mike more than anyone, having known him the longest. She seems to understand Mike's offhand actions, whereas the same thing would be read as rude to others. Goya, as weird as it sounds, is Mike's only motherly figure despite only being a year older. While she's overall concerned of Mike's illegal occupation and his dangerous habits, she understands why he does things the way he does it—to others though, she may look like an enabler. It's hard to say if she is.

Silas Dean
Mike's roommate, whom entered their circle at the first year of high school. It's a well-known fact Silas is uncomfortable with Mike; Silas makes comments on Mike when they're within vicinity of each other, but they've seemed to tolerate each other just enough to share a house together. Silas only puts up with Mike since they're both friends of Goya; he doesn't really understand what Goya sees in Mike. Conversely, Mike doesn't really understand what Goya sees in Silas.

Meta/Design
Tattoos
Special section to list all of his ink. Doubles are not listed if it has been mentioned beforehand.
Visible from front:
Visible from back:
Towards the end of a story, he’d have “TONY” accompanied with a smiley below his left ear, above the barbed wire.
View More