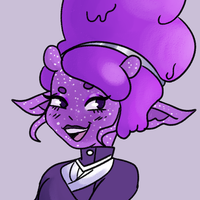 C█amega██ (fine with Camiga) is one of two would-be communications officers - responsible not for Resource Harvester coordination, but operations between the Homeworlds, the ship, and Earth. An extraterrestrial Telephone Operator, if you will - if they used telephones. The other was Dokon.

Homeworld communications are essentially shot back and forth through the short jump relay station (sometimes called "Buoy") network, encoded on Nickel Bearings. The "Local" stuff is usually by radio.

One of many who's name suffers from a lack of psionic modifiers of human languages, still gets a kick out of the thought of humans cursing her name while shaking fists at the sky.

After the 7b4 Incedent, A.K.A. Subject 4 accidentally the whole Short Jump Drive, she was moved to control Site 2 - The first (or last, depending on which way you are heading)  short jump relay station - because of it's own miniature drive (like all 38 relay stations have (wait is that base 9 + 1 or base a + 1)), it holds a pretty consistent position about 4AU directly solar south of Earth's Sun. There are frequently one or two others stationed there - but there have been may times where C█amega██ is alone.

Many Short jump relay stations don't have living space, only emergency shelters and supplies. The ones that do - like Site 2 - are fairly cramped.

C█amega██ is officially the only person in the crew  living on Iu'husid time, not Earth time - which leads to significant disconnect.

She is the filter for all information coming from the Homeworlds;

Everybody gets a little general info.
Everybody gets their own correspondence.
The Counselors get a little more data than the average crew member.
Nobody knows all of what C█amega██ might know - but it's her job to know the right people know the right things, rather than overwhelming everyone with everything.

Usually, if her filtered articles make it into the regular news dispatch, one can't tell. Referring to the crew as Humians, though - Many wish she'd stop that. Or at least refer to those on Earth time as Earthlings, instead of puns on the misnamed mission.

If you do ever make it to Site 2 - bring your own tablet. DO NOT borrow hers. You'll find it well nigh unusable, filled with a large repository of "anatomical studies" and "source material" that seem to be focused on the Human - actual Human - crotch.