Ruby (Rubin) Forrasis is a young man in his late teens to early 20s, approximately 5’5” tall with red-orange eyes and dark maroon hair. He also has a very faint beauty mark under his left eye. Rubin is overall tired and sickly, who can't afford medicine.

Rubin is kind upon first encounter, as this is a means for him to be polite and to stay out of trouble. He will start to get suspicious of people who are overly nice, this is because of his lack of trust against the world.

Bow n' Arrow. A weapon that was given by his mother. He not the best at using it.

Not to say that Rubin is a greedy person, but he will do ANYTHING to prolong his life, he is well aware that he is sick and his time is limited. To someone who is not familiar with him, would assume he is greedy with money/gold, but this is a means to buy medicine for his health.

Ruby grew up in Infigar City, a shadow of its former glory. Here in this city, there is a clear divide between the rich and the poor. The middle class so miniscule which is where Ruby’s family sat. Ruby was not terribly off in his childhood, he was cared for in his family, got a decent education and learn at least one combat skill which is customary within the country’s culture. However, he was a sickly child which prevented to physically go to school, or to play outside with other kids. Ruby is jealous every time he gets sick for a long period of time, especially towards Milan who has a healthier and active life in comparison to his. However, these feeling are subsided with time spent with his mother. He shared a special bond with his mother as he wouldn’t see anyone else as frequently, he was predominantly schooled and cared for by his mother. To add further, the reason why he’s an archer is because he was taught directly from his mother who was also an archer.

Around the age of fifteen, Ruby’s mother had passed away. In his point of view, he felt left all alone, and the loss has made him pessimistic towards the world. It is customary to turn the dead into jewelry to worn or hung within the home as decoration, and this was done to the mother. The rest of the family was grieving as well, occasionally Milan would be seen wearing the jewelry which left Ruby to be bitter towards him, and the jealousy is shown more intensely. The father focused more on work as a distraction to not deal with the loss, eventually he stopped returning home.

This left Ruby, and his older brother Milan, to be orphans, they were quickly moved out with what they could carry into the Amber Wringer Guild, even to leave their school life behind. The purpose of this guild is to patrol the border of the country to fend off huge creatures that pose a threat. It’s known that sometimes people don’t return from their patrol and hearing this leaves Ruby feeling grimmer of where his life is heading. He had no choice but to do this and knowing how physically weak he is, he concluded that he is most likely die on his patrol, if his illness doesn’t get to him first. .

The two brothers were quickly put into routine work along the border and were often paired as a team. Ruby who was still pessimistic, resentful and short tempered would avoid Milan by running way head or lagging way behind and usually never listens to him along the trail. His thoughts and feeling towards himself of his illness, his brother, the loss and disappearance of his parents, but as well as how poorly his society has placed him in a dead-end job, leaves him to not pay attention to his surrounding during his patrol; Ruby is constantly seen as clumsy, unconcerned and acts childish and ultimately faces an injury. 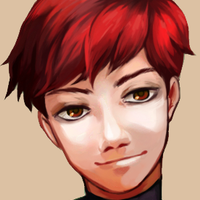 Brothers that grew apart. Rubin may have envied him for his advanced skills. Essentially, Ruby looked up to him, and knew he couldn't match him. Rubin loves his Mother, and cares for her well being. Ever since she passed away he misses her and struggles coping with the lose. Rubin looks up to his father, though can be iritated with him as well. He seems to be caught up in his work or praises his brother Milan more than to spend time with him.