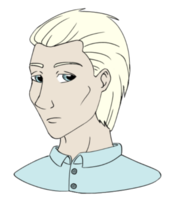 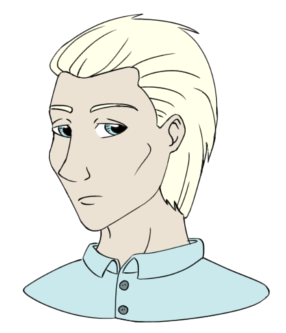 Micah is a decently tall young man who constantly looks like he is seeing something unpleasant. He is very pale, has short blond hair and blue eyes. Uses usually formal clothes.

Micah comes from a rich, borderline aristocratic family. From pretty young age he showed a lot of interest towards music and was therefore ushered into playing piano. He eventually decided to pursue that even as his career and he was just starting to make himself known in the music circles when he also met Norah, Reliam's ex-girlfriend, and the two musicians got engaged.

During Next Generation the romance between Micah and Norah has started to severely crack, as both of them were too much into their own careers to really put time and effort into their relationship. As a last straw Norah got herself pregnant, hoping that would keep them together. Micah was never really interested in having a family, but out of sense of duty he promised to formally stay together with his fiancée and her newborn baby, who was then named Leonardo. But nothing could save the already doomed relationship, so after a few more miserable years the couple finally broke up. After that Micah saw his son very irregularly and mainly was just interested in his own music.