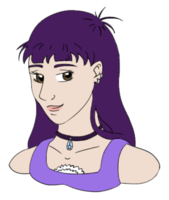 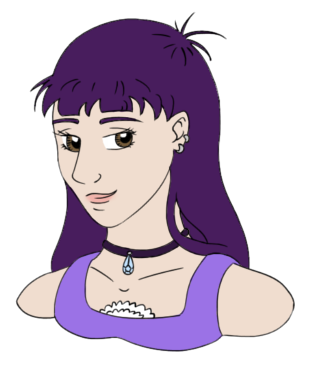 Norah is a petite young woman whose favorite color seems clearly to be violet. Most of her clothes represent that color as well as her long hair. Her eyes are deep brown.

Norah was born and raised in Misrea's Stuckald city. In her teenage years she went to the same school as Reliam and the two met each other through their hobbies: Relaim played soccer and Norah was a cheerleader. After a while a mere crush developed into an actual relationship when the two youngsters got together. They were generally happy, even though the relationship was somewhat shallow, until after a few years Reliam got into an accident and his both legs had to be amputated. From the very beginning Norah knew she wasn't all that interested in being the girlfriend of a crippled guy, so when Reliam became quite depressed because of his situation and started to neglect their relationship, Norah had a good reason to end the romance and find herself someone new. That's how she ended together with Micah who she also knew because of her hobby, as she was playing violin and Micah was a pianist. Even if their relationship wasn't any deeper than the previous one the couple eventually got engaged. During this time Norah finally decided to drop cheerleading and she started to pursue an actual career as a violinist.

But once again after a few good years things got worse. During Next Generation the romance between Micah and Norah started to severely crack, as both of them were too much into their own music to really put time and effort into their relationship. As a last straw Norah got herself pregnant, hoping that would keep them together and her public image wouldn't get stained with divorce. The plot did work to some extent: when Leonardo was born the couple promised to formally stay together. But nothing could really save the already doomed relationship, so after a few more miserable years the couple finally broke up. Norah barely saw her son after that and he was left to be raised by relatives and an expensive boarding school, as she no more had any use for him. Norah herself focused mainly into collecting fame and fortune from anyone else than her broken family.