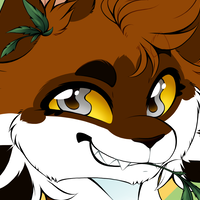 Cheryll is a 16-year-old female cat who is generally quite timid towards people she doesn't interact with much or strangers but can be fun to be around once she gets to know the person more. Cheryll's personality is usually shy or soft-spoken around large groups of people or in a public setting but she can be much more outgoing when comfortable. even though Cheryll isn't much of a talker, she can get mad easily when provoked or when feeling protective about her friends.

Cheryll's blue power is very unpredictable and has the tendency to get activated with the use of her emotions. Because Cheryll is quite anxious and timid by nature, she finds it more often than not that her eyes start to exhibit a faint glow, which leads to minor inconveniences during unexpected times of the day/night. Since her power is fueled by her emotions, she has had to learn to control her temper to avoid letting her powers loose, even if it were by a little spark- she is still learning how to control her blue energy, and doesn't want to accidentally hurt anyone because of letting her guard down.

When Cheryll's power is in its full potential, she has the ability to conjure a massive amount of blue radiation/electricity type energy that spans for around 15 meters, if not more. the force of the energy can send objects flying, and if learned to control her powers, she would be able to learn a sort of telekinesis. Her powers in full potential are also able to take forms to mimic things in real life, such as animals and objects. The abilities of her powers are not fully discovered yet, because of her lack of training. at the moment, the best Cheryll can do with her powers is produce small energy that has the span of 1 meter, and lift small objects if she concentrates hard enough.

As per the name, Cheryll's dream-state is only really activated when she is dreaming, giving her the ability to do whatever she wants in those dreams and sometimes predict forthcoming events if she is lucky enough. This power is not really useful for much except doing things she normally doesn't do in real life, but the power comes with a setback- whatever physical feeling she encounters can have effects on her body outside of the dreaming state, such as wounds and scars. Getting killed inside her dreams has a 100% chance of killing her in real life, so she has to be careful as to not accidentally walk into a lucid nightmare unaware. Cheryll's favorite appearance to have in her dreams is a pair of soft yellow wings that match the color of her dream-state eyes (see reference for details!).

AU backstory (For my Avril world)

[ Best Friend ] Cheryll's closest friend, the two like to hang out together a lot. they share interests which sparked easy and comfortable conversations between the two of them which led to their friendship in the first place.

[ friend ] Linu is like a brother to Cheryll more than anything else, she always feels comfortable with telling him anything that's bothering her. both of them have had each-others backs in times of need. even though their personalities are pretty much opposites, they get along quite well.

[ Friend ] the two are not as close as Cheryll is to Linu and Puppy, but they still get along well. she occasionally stops by his place along with the other two to catch up and enjoy some of Snickerdoodle's recipes.