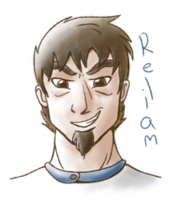 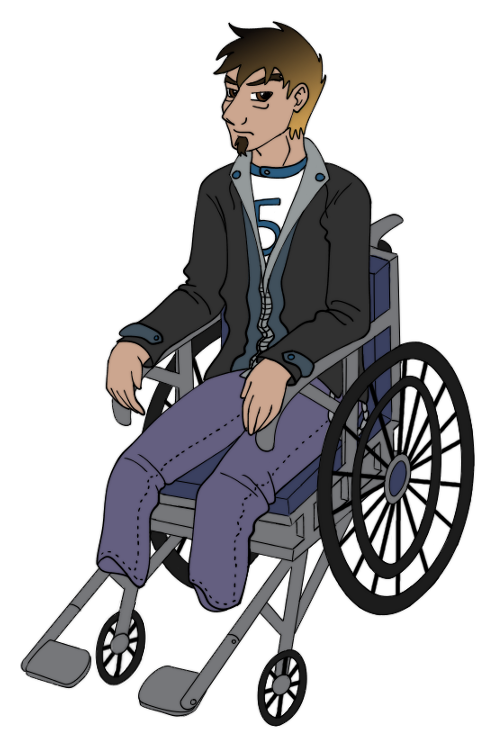 Reliam is confident, proud, talkative, competitive, stubborn, sore loser, short tempered and unforgiving. He goes through solid stone if needed and doesn't care even if someone stands in front of that stone. Hates getting pity because of his legs more than anything. Is pretty narrow-minded and insensitive towards other people. Suffers from insomnia.

Reliam would be a 185 cm tall young man if it wasn't for the fact that both of his legs have been amputated a bit below the knee, which is why he has to use wheelchair to move around. He has small beard, strong eyebrows, big and straight nose and sharp but tired-looking brown eyes. His hair has been dyed and cut to be longer and darker brown at the forehead and shorter and yellowish at the neck. The clothes he likes to use are usually fairly simple and dark colored, except for his bright white t-shirts that are remnants of his soccer player days.

Reliam was born in a country far north from Misrea, but he and his parents moved to Stuckald city when he was still a child. Life in the metropolis was hectic and his parents worked hard to sustain their new life, but Reliam never felt like he was pushed aside. Instead he just focused into making a lot of friends and playing soccer in his school's team. When he was a teenager he also met a girl named Norah through his hobby, as she was a cheerleader. A crush developed into his first romantic relationship, and even though it was a rather shallow one, Reliam really felt like he was in love.

After a few years the couple was leaving together to a hiking vacation to the snowy mountains of Zaumla. Neither of them had a Pokémon companion of their own, so Reliam's father offered his Houndoom to keep them safe. But because Norah was afraid of the beast Reliam refused to take it with them, which is why they barely could do anything when a wild Mamoswine attacked them. Reliam got Norah into safety and the girl only suffered from a few bruises, but the boy himself was badly trampled by the mammoth. His legs took the worst damage and when he was taken to a hospital the legs were diagnosed to be beyond repair. That was a huge blow for the athletic youngster, who soon afterwards slid into depression. He cut most of his social ties and wanted just to be left alone, which eventually made Norah to dump him, too. For a long while things looked really grim.

But fortunately time did heal some of the damage that had been done. His legs he could never get back, but after a couple of years Reliam's fighting spirit started to gradually return. He started to work out the way he could and he even found some interest towards photographing. When he felt he was in good enough shape he wanted to close the circle by visiting Zaumla once more, but this time his parents weren't going to let him leave without a Pokémon. They gave him a Scyther named Saramu, who was originally from Reliam's cousin from Johto. Reliam had never been particularly interested in training Pokémon, but to make his parents let him go he took the bug with him - though he did try to release it as soon as he could, but as the darn thing didn't leave anywhere he seemed to be stuck with it.

That's how Reliam's career as a Pokémon trainer started. The journey towards Zaumla was rather long and during that he did try battling with his Scyther a few times, no matter how reluctant he originally was. From Zaumla he ended up catching his second Pokémon, Bagon named Bron, just because of how ferociously the small dragon fought against Saramu. On his way back home he met a girl named Charlotte for the first time, fought against the region's first gym leader out of curiosity and caught yet another creature, Jerico the Nidoran. Despite a few extra detours Reliam was eventually back in Stuckald city, but now when he had traveled around a bit just hanging around home felt really boring and meaningless. That's why he, after having some more adventures with Charlotte, decided to really leave the past behind and continue Pokémon training and take it seriously from now on.

After leaving home once more Reliam challenged the second gym, bought a "shiny Magicarp" Calypso, evolved his Pokémon (including Calypso, who magically turned into Milotic instead of Gyarados), got robbed and had other equally fun activities. He also made some new friends and became closer with Charlotte - so close actually that he started to develop a serious crush for the girl, no matter how much he feared to admit it even to himself. Though he did get some other things to think about when after beating the third gym he accidentally caught Alora-Jynx into a custom made Heart Ball, which made the ice creature to fall in love with its trainer. On top of that he had some severe issues with Jerico, who after evolving into Nidorino had become downright dangerous towards humans. With his imbalanced team Reliam struggled through fourth gym before he started to sort things out. He was about to leave Jerico into a training school, but the school was much more expensive than he had though - and the Heart Ball turned out to be just as valuable. As Reliam had funds to only take care of one of his problem Pokémon, he made Jerico and Alora fight each other to death. Alora lost its life, so Reliam sold the Heart Ball and left Jerico to the school for several weeks.

This is about as far as I managed to rp Reliam's life before Pokemon Unknown was closed down. Anyway after that Reliam continued building his team by evolving Bron and Jerico the second time and adding a couple new members to it, them being Zel the Darmanitan and Madara the Pangoro. He eventually started to date Charlotte and their relationship continued to develop while Reliam challenged the rest of Misrea's gyms. He also tried to challenge the League, but didn't manage to conquer it before something unexpected happened and put his training onto hold: Charlotte was pregnant with twins. It was quite a shock to the parents, but they still decided to do their best and have the children together. From the birth of the two girls starts the Next Generation timeline.

Because Reliam and Charlotte were that sort of geniuses they named the newborn girls Miranda Melina Miraka and Marilyn Miriam Miraka. To support his family Reliam took a job as a news reader, and as the job came with health care system he could finally get himself prosthetic legs. Life in Lemidae, where Charlotte and Reliam had previously moved into, went as smoothly as life can go: there were problems and bumps on the road, but nothing that couldn't be sorted out together. The first bigger change in years was when Reliam's father died of heart attack rather suddenly. That made Reliam become rather well aware of his own mortality, and when he turned 40 years old and started to get his first gray hairs, he had a minor middle life crisis. It was nothing that buying yourself a boat couldn't have fixed, though. The last thing so far known about Reliam's life is that at some point when his kids were about to become adults themselves, Saramu died of old age. No matter how the trainer had originally despised the Scizor, losing a companion that had stayed by his side for tens of years did feel like an end of a good, long era in Reliam's life.