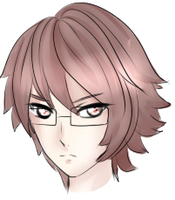 The middle quintuplet of the Matalic siblings and often the most antagonized. As a child, Michael was rather quiet and docile, often spending his time reading and solving puzzles. When the siblings were split up for adoption (Quintuplets were 11), Michael was taken in with Jake temporarily. As a teenager to his young adulthood, Michael struggled with varying degrees of addiction which caused a significant falling out with his family aside from Jake, who helped support him through it all. Though he became close with his brothers once again, his relationship with his sister never fully recovered. He eventually married his sister's best friend and slowly became himself once again.