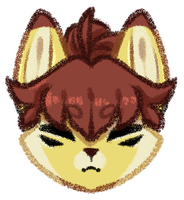 Don't let Rakkii's short stature and small face fool you or else he'll have you realize your mistake sooner rather than later. Despite his appearance the teen is abrasive, always speaking his mind and rarely thinking of the consequences to his words. He's blunt and has a short fuse, having no tolerance for those who insult him for any reason. For all his flaws though no one can deny his sense of determination. He never backs down from anything, taking up any challenge without hesitation. This also applies when it comes to his friends. Once his trust is earned he is incredibly loyal. He may be unafraid to call them out on things he disagrees with but he does it for their own good. Even then he sticks with them no matter what. Overall Rakkii is a boy with a lot of spunk that draws people in, both good and bad.