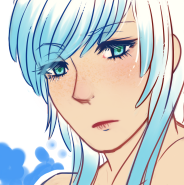 INFORMATION
“You’re giving me promises you don’t understand the consequences of. If you’re supposed to be next-in-line for the throne, you still have a lot to learn.”

A man known for his wide array of varying levels of offended expressions, Julius is certainly a person who is hard not to notice, and even harder to forget. Years of being locked up in his garden home have made him somewhat of a pessimist and his view on the world is often very cynical, but he is simultaneously very curious about the things around him and easily amused by very simple things. Regardless, a certain kind of aloofness characterizes Julius, and he is notorious for his witty comebacks for people. However, he's a very devoted friend once you get on his better side: beneath the cold exterior lies a very insecure young man with years of humiliation and solitude behind him, and who craves for companionship of other people.

Cursed since birth, Julius’ arms are covered in small white-and-blue feathers, and a long bird tail of the same coloring is growing out of his lower back. Originally his parents hid him from the public in order to keep their good reputation, but soon everyone came to know Julius as the “beautiful bird boy”, and his relatives made him a public attraction to save face. Until turning 18, Julius lived in the large family garden, in a small hut built for him, and although he was pampered and spoiled and he received good education, he was ultimately a prisoner in his own home with no friends of his own. He grew bitter and cynical, especially when people all around the world started coming to ask for his hand. Julius denied all their advances and proposals much to his parent’s dismay, and they perceived Julius as troublesome and arrogant, when Julius only wanted to be respected as a person.

Julius then met a mysterious man named Nuuk who ended up escaping together with Julius from his home, and despite the efforts of the guards, the two managed to flee. Initially Julius didn’t like Nuuk (whose original secret intentions were to sell him to a collector of magical beings), but the two eventually grew to like each other, and eventually became lovers. Julius also started changing upon finally getting his freedom, becoming a much more confident person and letting his dormant qualities to finally shine - in both good and bad.

Julius is a young man on the taller side, 175cm in height. His body is strikingly androgynous and slim with long legs, giving him a very elegant appearance. Before his escape from the gardens Julius was somewhat scrawny and fragile looking, but since then he has gained some healthy muscle on his upper body back, emphasizing his shoulders more. He has a tribal marking on his left side’s hip showing he is cursed.

His features are generally somewhat long with oval shaped face and average sized nose with a slightly pointed tip. His slightly narrowed eyes are blue with long and dark eyelashes and his lips are full and noticeably red in colour. His white hair with blue tips is soft and cut in a layered manner. His hair is to his shoulders except for his sides which are cut along his face, and two longer bangs coming from his back and resting on his shoulders, separate from the rest of his hair. His locks partially cover his right eye.Julius’ feathers grow mostly on his arms, emphasis on his wrists especially. All the feathers are white with blue tips (his hair is also affected by the curse hence why it’s this colour. The blue parts also always come back even if you cut his hair). Aside from his hair, eyelashes and eyebrows, Julius has no other body hair as a result of his curse and excessive amount of feathers growing on his body.

During his garden era, he is often portrayed wearing expensive looking robes of bright colours, often in white and blue to match his feathers. He is also seen topless with robes around his waist. On the road, Julius often wears very common and even somewhat dirty looking clothes to avoid attention, usually hiding his hair and hands underneath the clothes. His preferred way of clothing, however, ranges from expensive noble attire to somewhat revealing and flashy clothes, and he isn't afraid of showing off his body to others.

Raised to be somewhat dainty and demure, Julius takes all out of his newly acquired freedom and acts exactly as he feels like he truly is: haughty, loud, dominant and sharp-tongued. He has the mind of a strategist, cunning and perceptive, and although Julius never shone in his academical studies, he is very logical by nature and finds it easy to see connections between things and use them for his advance. He also has a surprisingly good grasp of human nature and behavior, and although his social skills aren't top notch, he is talented at reading people - a skill he developed in his garden prison as a way to humiliate the arrogant suitors asking for his hand. As a highly proud but also a very bored person, Julius treated this as a game to pass time. He finds pleasure in coming up with witty comebacks, and he can be especially ruthless towards people he dislikes.

Perhaps due to his upbringing, Julius has developed a high need to entertain and impress people. He will very fast go out his way to try to charm other people, and finds it to be an exciting game to win someone’s attention over. Julius is both proud and very much self aware of his good looks, and more often than not uses it as a way to get what he wants. Julius is also very flirty and provocative by nature, even when he doesn’t mean to be. Ironically though, Julius is also very sensitive about his appearance when it comes to other people pointing it out and showing interest to him first: he dislikes being the object of other people’s desires, and if he feels like people are interested in him only because of his looks and not for his nature, he can get very merciless and mean towards these people. His dislike for being idealized and desired for nothing but his body is very highlighted due to his past experiences with some his suitors, who only wanted him for his looks and social status, going as far as not treating him as a human being at all.

Julius is demanding (both towards himself and others) and loves to be pampered, but usually knows his place and doesn’t intentionally want to be selfish or cause trouble to others: he hates feeling like a burden, as he grew up considering himself a waste of space. He can be surprisingly considerate and meek too when you catch him off guard, and once he starts warming up to you he is very affectionate. It might not always be obvious when he starts liking you though, as he tends to hide himself behind his cold and sharp-tongued exterior, often to the point it frustrates even Julius himself.

His moods tend to be unpredictable, and Julius usually experiences emotions rather strongly, his feelings usually showing on his face and making him rather expressive. Even if he can usually control himself to some extent when he absolutely needs to, he usually doesn't bother doing so. Especially with Nuuk he tends to show his emotions without much reservation, mostly because he feels comfortable enough to not pretend around him, but also because he originally didn’t like him, and tried to rebel by being difficult and moody. He is fast to get his feelings hurt, but in turn he usually also calms down just as fast.

Growing up socializing only with his family members and the suitors, Julius is not used to dealing with many people at once nor spending time with others for very long. Even so, ironically, he requires human company or at least presence quite often in order to feel calmer: he fears of returning back to the kind of life he used to lead, and a person who once lived in solitude, he has now become afraid of being left completely alone. As a result of this, Julius can come across as very fickle and contradictory: he tends to push people very aggressively away from him, but at the same time he yearns for companionship. That being said, Julius has gotten very accustomed to his companion Nuuk, and finds his presence very natural for him - it doesn’t particularly bother or stress him out the way other people and their presence can do. He has grown to genuinely care for the man that originally mainly just annoyed him, and puts effort into their relationship.

Julius is the third child and the first son of a noble family of the house Arayes. Soon after he was born, small feathers started to appear on his skin, and no matter how many times the worried parents plucked them out, the feathers just grew back. Fortunately they only grew neatly around his arms and formed a tail on his lower back, which was undeniably bothersome, but not something that couldn’t be hidden. Soon after his parents realized it was useless to pluck the feathers away, Julius was strictly forbidden to go outside his home unless he was fully covered and had someone with him. While they at least initially loved their son, they had a reputation to keep.

The boy grew up with no friends other than his relatives, and some occasional children who were visiting the Arayes family with their parents. This ensured he still got socialized with people and understood how to behave around other people, but ultimately still left his skills lacking, especially given how different nobles tend to be.

His parents tried to come up with a solution to their son’s problem, but nobody could help the poor boy: doctors around the country visited him, trying to find a cure but each and every one of them failing in the task. Even though they were no use, the word of the beautiful bird boy made it’s way all around the country and even beyond the national borders, and soon there were people coming to see him - and as he got older, they started asking for Julius’ hand. All of them tried but none succeeded in marrying the white haired boy, and with each new rejection his parents grew to resent their disfigured son: they thought of him as difficult and arrogant, a monster, who refused to get married to personally spite his parents who had done nothing but good to him all these years - completely ignoring the imprisonment of their son, and Julius' own feelings regarding marriage.

The turning point in Julius’ life when he was approached by a suitor who actually didn’t seem to have much interest in Julius. Although initially willing to sweet talk in order to get his hands onto this priced possession, he soon realized the horrible situation Julius was living in and lost his temper.  He insisted Julius should live a life on his own, not controlled by anyone, and not letting people to restrict him like they now did. The two soon got into an argument, but by the end of it the duo decided to escape from the garden together, Julius knowing an escape route. Now living as a fugitive, Julius and the man, Nuuk, would travel together around the country, Nuuk internally struggling over whether to sell Julius like his original intentions were, or to pass by the offer and let him be free.

Through their numerous adventures the two grew closer, eventually developing feelings for each other and becoming partners.