Just so you know, his weapon is listed as “Raspberry Soda” (edit: or rather was)

But that aside, he’s a great character, like all of your characters!

GFJK IM LAUGHING thanks for notifying, I was editing his layout on top of Etien's and this often happens as a result haha. BUT THANK YOU it makes me happy to hear that; he's one of my oldest characters posted on TH! 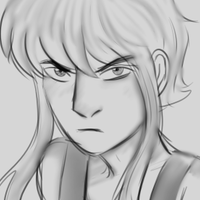 I FORGOT TO CLAIM FOR THE FAVOURITE CHARACTER THREAD, GOT ABSORBED IN WRITING THIS AND THEN SOMEONE ELSE CLAIMED but I thought I'd leave what i was gonna post here anyways bc I really appreciate this character???  i hope you don't mind  /)n(\

----
First of all, the bio pretty much had me hooked on the first sentence - "A man known for his wide array of varying levels of offended expressions".  I feel like that's self-explanatory.   I like his personality in general - particularly that he's a very expressive + sensitive character, but also haughty and aloof at times.  His backstory is also interesting namely because the curse he suffers from isn't one that affects his life that badly in a physical sense compared to some other cursed characters, but the problem is namely an emotional sense and how the people around him treat him.  Not to mention that, this in particular is fairly relatable - I'm pretty sure plenty of people have felt like a Julius at times and felt alone in terms of friendships, sometimes even feeling that people didn't want to be friends with them because of who they are but because of something else.  On an unrelated note also pertaining to the backstory, the fact the feathers spread to his neck just makes for a more interesting - and problematic (for Julius, that is) - character arc.  At least to me when reading his bio, I wanted him to find happiness, so should his story continue that plot point would definitely keep me hooked!
Next, his design is just very graceful and birdlike?  It really compliments his bio, both colour and design-wise.  It's also really pleasant to the eye (though that might be just because I generally like any and all shades of blue) and some of the art in his gallery is gorgeous.  *u*

TLDR; your bird son is a good son and i love him

SHRIEKS THIS IS SUCH A NICE COMMENT I'M SO!!! EMOTIONAL WHAT THE HECK!
thank you so much omg it makes me so happy to hear someone even went through his lengthy bio, as his bio is definitely one of the longest I have uploaded here and fear people will not bother with it bc of that sdfg.....

aaa gosh now I really feel like I should draw him more! He is such an old character yet all I ever do is doodle him ; o ;

Ah you're very welcome!  I'm also glad the sudden, random comment didnt bother you too much!  <3

Honestly it might be true that the bio is long but I feel like that's just more incentive to read it, tbh - it just shows how much effort was put into developing the character (and also reminds me of the bios I have that I should really be working on LOL).  It just depends on what kind of person you are I guess - some people aren't that into reading long things - but I'm sure there's more people out there who like reading character bios, and consider the long bio the opposite of troublesome!  ^-^

It didn't bother me at all; quite the opposite! < 3

And yeah, I usually try to put a small summary in each bio before I get into specifics but even then I'm often like... damn... this is way too long me @ me draw them instead of writing a novel in the biography haha

Oh god that's funny because I'm at the complete opposite side of the spectrum!  I'll draw my OCs and write little oneshots (though I normally don't upload these to Toyhou.se) but then for the bio I'll write a simple summary and just have a bunch of notes for personality and backstory that haven't been exactly eloquently written yet.  :'D
we balance each other out //kicked

I usually have no trouble with the writing part since I write super fast, but drawing is always a struggle because I'm slow and my sketches aren't usually something I want to upload on my character's galleries ;;;
Bio is relatively easily like I usually fart them out in 30min max and in one sitting. Not that they're very good and eloquent but at least they're done haha

GORGEOUS, I AM SLAIN