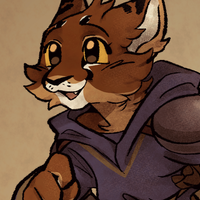 Provinces she's been arrested in: All of them

While Blivo is a fan of coin and other shiny things, she's not particlarly accurate to the stereotype of a thieving khajiit, due to being both clumsy and soft. She's rarely one to attack first, and usually she just runs away. Despite this, she's become a bit of a rogue, mostly through accidentally stealing items while trying to talk to people behind counters.