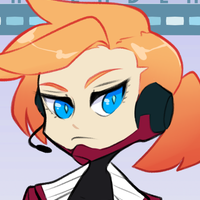 Personality:
Hot Pants is infamous for being...expressive. Many know him for his broody disposition or unpleasant attitude, giving lip to just about anyone. To add to his already off-putting demeanor, he's prone to getting snappy. He tends to blow insignificant matters out of proportion. Sure he may end up yelling, but it's worse when he's quieter during a fit. Silence usually entails that he's done with an argument, wanting nothing to do with the subject from that point forward. He stays silent for long periods of time and is dismissive of others.
He's got no social filter, either, and he doesn't plan on having one. He prefers to have heads turning during an argument when in public as it gives him an unfair advantage to finish the squabble faster.
He's also mistrusting of strangers or anyone that shows a little too much interest in him. He weeds those wanting to take advantage of him by displaying a terrible temper. While he calls it a facade, it just shows how fragile he is. He doesn't want to open up to just about anyone. Nobody's quite sure where this behavior stemmed from, not even him, but many point a finger at his troubled youth.
It's difficult to try and reason with him on just about anything. He's adamant and it's difficult to dissuade him out of certain situations or opinions even if they have negative or dire consequences. Even when it blows up in his face, he refuses to learn from his mistakes.

Despite being called a Hell spawn, he's actually a sweet kid that wants to help others. His leadership skills shine the most when in times of need, being calm and collected enough to help pacify others. He's a great shoulder to lean on but that's about it. He's good at keeping others composed but he has no clue on how to give advise. He tries his best, at least.

He's also quite spiteful, especially when an Immortal tells him what he can't and can do. Please don't test him if you'd prefer to see him alive.

The topic of family is touchy. Having lost two relatives, and recently lost his mother to TB, it's easy for him to get broody or even outright depressed. He can even get violent if the right (more like worst) words or questions are said.

Bio:
A Daten City local that lived in the city's slums during his youth. Neighbors and gangs alike knew him for his temper, even as a child. A few have speculated a reason for why he was that way. Some said he was the bastard son of a Berzerker. Others thought some Immortal bewitched him to only be a pissy child. Of course, they're only rumors and have absolutely no evidence to support them. Despite the comments, mothers adored and trusted him to help out. Hots himself couldn't afford to go to school as his mother fell into a deep depression shortly after his father's death. He bided his free time, when he wasn't caring for his mother, by helping other parents get their children ready for school. He kept doing this well into his early teen years, even after being in a gang and incarcerated several times. Not one of the parents lost trust in him for everything he's done for the families.
It wasn't until his early teens that that others took him seriously enough to pose a threat should Hots be messed with. An Angel had suddenly walked into his neck of the woods and it was obvious the sap was lost. Despite the fact that the Angel was supposed to be holy, they practically berated him and he was quick to show them to choose their words more carefully by hacking off a wing.

Entering his late teens, he began seeing an organization settle into Daten known as Lethocs. This institution claimed that it offered faster relief efforts to humans affected by the collateral damage done by Immortals. At first, Hots thought little of it but remembered that his late father was involved with the organization before his alleged death. After persuading an older sister, named Jacket, did the both get into Lethocs thanks to the influence of an uncle who was previously a captain there. The siblings didn't stay together for long, both focusing on their respective branches. Jacket became an elite sniper while Hots became part of a super soldier enhancement program. There, he met a guy by the name of Dog Tags and the two remained close while employed in Lethocs. They went through thick and thin, especially after enduring the pains of Soul Thread enhancement. Together with Dog Tags and Jacket, the three were model soldiers and the go-tos for a strike team. They would have been unstoppable if it wasn't for Jacket mysteriously disappearing during a mission. Several searches turned up nothing and Jacket's case was set to the side almost immediately. Before he could question anything, Hots was sent to a lesser branch of Lethocs called VAG. The branch dealt more with covert operations and politics, obviously Hots being on the more political side of that branch. Lethocs' reasoning being that they didn't want to lose another important soldier, but Hots saw his change in rank as a cover-up. Something to keep him from the truth.

Hots became disenchanted with Lethocs but he stuck with VAG as it was  his only connection to the organization. He formulated a plan to find out what happened to his sister and potentially know the specifics of what happened to his father. As much as he hated being a paper pusher, he sucked it up but matters became worse with a new recruit.
VAG acted as a separate entity from Lethocs, the branch still employing Immortals since the human uprising. Here, an Angel named Duster entered the scene hoping to score a few brownie points to get back to Heaven quicker. Hots at first paid no mind to the new recruit but Duster became enamored with him to the point of obsession for some reason. The guy's constant prodding tested his patience and would snap at just about anyone because of it. Eventually he got fired for his temperament, blowing up on a captain from Lethocs. This, of course, made Hots livid but it was also his opportunity to get away from Duster.

Duster, however, was persistent. The man kept trying to push himself into his life and begged him to return to VAG almost on the daily. To add on to the stress, Hots developed a strange illness. Being a super soldier meant that he was genetically enhanced with Soul Threads. Having Soul Threads as a human meant many health complications and for Hots, it developed into a pulmonary illness. To tend to his illness, he went into hiding, hoping that getting away from Duster would help with recovering faster.

In hiding, Hots sought asylum in Daten's Abbey where he became acquainted with the practices of the Templars. Hearing all the weird stuff they did, he became intrigued enough to work under their ranks. More specifically, he was a missionary, an active participant of the Crusades that plagued Daten at the time. They weren't literal Crusades, being a fancy term used for skirmishes between Knights Templar and Demons for territory. He didn't stay in the Abbey for too long as not even a few months of joining did disaster strike. The leader had been assassinated and everybody was ordered to disband for their safety.
Hots couldn't simply return to his home either, fearing that he would alarm his mother with the news of his sister's disappearance or death. He couldn't bear the mere thought. With no other significant skill set, he became a missionary for hire. His services were never monetized, receiving housing and food as payments while serving under clergymen.

Although he made an honest living, he couldn't stay in any one holy institution for too long without jeopardizing the safety of clergymen. Demons were still after his head for being an active participant in the Crusades. Without thinking ahead before leaving the last church he set foot in, he found himself homeless with no money and job. He was getting desperate and fast, but there was no way he was still returning to his mother. The only other alternative, one he loathed even considering, was getting help from that Duster guy. It didn't take long for Duster to locate him and brought him in to an apartment. Whatever fears Hots had regarding the other man, they were never realized. In fact, it's as if Duster's entire demeanor changed once they moved in together. Of course, the guy wanted...favors every now and then but he found himself warming up to Duster as time passed on to the point where he truly fell in love with him.

Despite Duster providing Hots with money and necessities, he missed keeping his hands busy. At first he tried out a simply body guard job but when that proved too "dangerous" for Duster's liking did he pull out. He humored becoming a hairstylist at some point and only brought it up around Duster when the topic of jobs came up between the two. In truth, Hots was working toward rejoining Lethocs. He was still determined to find out what happened but this time, he was playing by the book as much as he could. Of course, Duster was understandably upset about being lied to but it's a consequence Hots was willing to take to learn the truth.

Since then, things have simmered down between him and Duster regarding their polarizing views of Lethocs and has reconnected with many people from his childhood and even past co-workers like Dog Tags. His time is divided between Lethocs, the Abbey, and his pets.