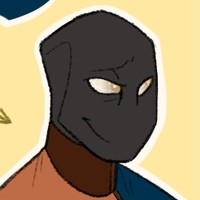 Gasher may look a little too nice and shy to be part of something as huge as Sworm’s army, but don’t let it fool you: he’s a member of the elite squad for a reason.

He would, however, rank much higher if it wasn’t for his lack of resolve and incapacity to give directions, but is quite content with his current position.

Displaying every sign of a true soft-touch, people always assume Gasher will be the weakest link of the squad: easy to manipulate or to convince to turn on his team. The reality is that Gasher is far from being naive and will shut down as soon as he figures out someone is trying to deceive him. If you ever reach that point: consider yourself out of his life forever. He has no time for people out of his inner circle and getting into it is difficult.

Otherwise Gasher is stern-faced but easy to approach. Not much of a talker but happy to entertain a conversation thrown his way. He cares very strongly for the people in his life—to the point of dependency. He’s not one to engage unless somebody else makes the first move and he couldn’t take a decision even to save his own life.

Chill but far from a pushover, Gasher does not cope well with solitude and is always seen flanking the other members of his squad (Pénurie, Virzon, Scuttle). Next to them, Gasher appears forgettable and easy to miss, and likes it better this way.

Finally Gasher’s main personality trait is his resignation. He’s unbelievably quick to accept whatever fate or order Pénurie, Virzon or Scuttle have decided for him and will almost never argue. If he does, they can easily convince him to do whatever they want. The only exception to this rule is when putting up with Scuttle‘s prank ideas (and even then—Gasher still embarking into them because he’s been told “pretty please” is not unheard of).

Like most war parasites from the latest generations, Gasher was dropped on his target planet, lost his original team there, and got picked up by random thugs to be used as their hitman. He did not fight any of this. To him it was still a better alternative than dying off on some random planet without getting the chance to see anything life has to offer.

To be fair Gasher could have continued as a hitman until someone took him out if it hadn’t been for Scuttle‘s institence he joined his and Pénurie‘s team. Gasher had came to their fighting pit a couple times already, either to assist somebody or guard them for the event, but was not a fan of the place. Still, he needed somebody to guide him and Scuttle‘s joviality coupled with Pénurie‘s charisma and power eventually won him over to their side.

Gasher was an absolute disaster as a gladiator. He was a good fighter but hated the attention, and was often seen happily hiding in Pénurie and Scuttle‘s shadows. More often than not Gasher would rush down backstage as soon as his bout was done, not realizing his distanciation was actually what made his work alluring to his fans.

He wasn’t one to indulge too often but certainly didn’t say no when the mood was up.

Without Gasher, Virzon, their last squad member, would have never joined the team. It was him who nursed her back to relative health and his quiet and stern behavior that really anchored Virzon to the three of them.

gladiator ➤ soldier in the sworm

Later, when Pénurie stroke her deal with Sworm, Gasher joined her army with no hassle whatsoever. Gasher is entirely satisfied with where he lives and what he does as long as he is with his squad.

Gasher already follows orders flawlessly among his Squad, so he's absolute gold soldier to his Warlord.

The two don't have much interactions apart from professional ones, and the only times Gasher is seen somewhat defying her is when Krazt's safety is involved. He will not take the blame/a hit from Sworm for anyone else.

Ultimately Gasher's loyalty lies with Pénurie more than it does with Sworm. He's reliant on her guidance and decisions. She offers the lead he needs and in return, Gasher's presence and sensibleness bring Pénurie a semblance of stability in her very chaotic mindset.

They rarely argue even when she treats him like trash: her insults and haughtiness flow like water over Gasher's back. He never retaliates and only defend his views when something big is on the line and about to deconstruct his routines.

When they're together is when Pénurie is the most relaxed ; unconsciously helped by Gasher's pragmatism. He appreciates those rare, quiet moments very much for what they are, but as it's often an hassle to ground Pénurie down, he nevers bothers seeking them out.

Even if Pénurie is often seen treating Gasher like trash, she will not accept people insulting him. Her cold schemes and capacity for petty vengeance, coupled with her unpredictability, make others wary of messing with him.

Gasher provides Scuttle with impeccable companionship. As Pénurie and Virzon are often very busy with their duties, and since Scuttle and Gasher are the two least sollicited of the Elite Squad, the latter tags along with Scuttle 90% of the time. The only moments they're seen apart is during rare solo missions. Otherwise Gasher is Scuttle's shadow.

Although Scuttle is really appreciated within Sworm's army, his general loudness and impredictabilty has made some parasites warry of staying near him for too long. Scuttle is never alone, and when he is: he has Gasher.

This is a very equitable relationship for them. Since he's loud, Scuttle takes the hit for most of their failures and/or repercutions, meaning Gasher can comfortably sit back and avoid accountability while someone else also takes decisions for him.

Whereas Gasher's relationship with Pénurie and Scuttle is an easy one to break down and analyse, the one he shares with Virzon is a little less straightforward.

Similarly to Pénurie, Gasher is Virzon's stable ground: he appeases her with his presence and keeps her high-strung nerves in check. The main difference being Pénurie usually wants and actively seeks danger and chaotic stupidity, contrary to Virzon who absolutely does not.

So where Gasher brings Pénurie stabilty, it's more a form of appeasement that he provides Virzon with. In return Virzon is fiercly protective of him, and considering the fear she conveys in the troups, other parasites rarely mess with Gasher in fear of Virzon's retaliation.

Even if Gasher is chill and pragmatic, his little pride is very much present and he still knows he's high rank. He requires respect from his subalternes and won't hesitate to assert it with force if necessary.