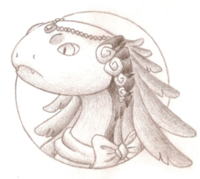 Tuuli, Tuiske and Auer were the first ones to move into Seafoam clan's territory after its settlement. They originate from a clan which consisted of mostly Coatls and Spirals, and the two pale colored sisters eventually got tired of having their health often questioned by their kin and decided to seek a new place to live. When they found Carran and Marus and decided to stay with them, Tuuli helped the two progenitors defend their home and fight at the Coliseum. Now, when the clan has grown larger she barely does any fighting anymore, but likes anyway to maintain her reputation as someone not to mess with.
Tuuli is the one who came up with the rule of Seafoam clan taking in only dragons who are colored with a shade of blue or green. It seemed to fit to all of the dragons there were at the time anyway, so Carran decided to let the rule stay. Tuuli is the only one who actually monitors the rule though, and that's why she was pretty angry when for example Nightblade, a very barely blue Ridgeback, joined the group.