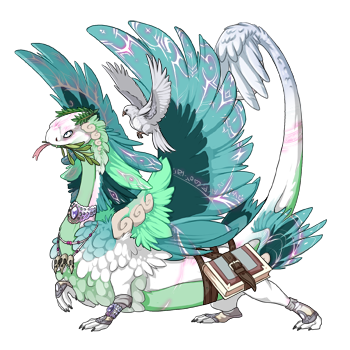 Tuuli, Tuiske and Auer were the first ones to move into Seafoam clan's territory after its settlement. They originate from a clan which consisted of mostly Coatls and Spirals, and the two pale colored sisters eventually got tired of having their health often questioned by their kin and decided to seek a new place to live. When they found Carran and Marus and decided to stay with them, Tuuli started raising Auer pretty much as her own descendant and even gave him his name.
After that Tuiske has helped to take care of many other nests and is commonly seen as an auntie by all the new hatchlings born to the clan. When badly wounded Lachancet was taken in to the Seafoam clan, Tuiske also helped to patch him up and monitor his healing process. Some sparks of love between those two began to fly soon afterwards.
On top of everything, Tuiske has really devoted some time to understand and become friends with fae Marus, whose talk the Coatl can barely hear. It has led to many interesting misunderstandings.