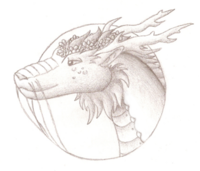 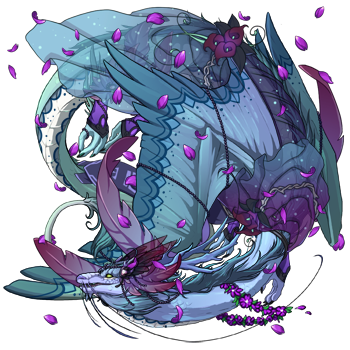 Faelten comes from a very conservative family. After joining Seafoam clan she soon made friends with two other adolescent dragons, Auer and Eidiel. They sure had their differences, but they never bothered any of them, until they grew mature enough to pick a mate for themselves. That's when Eidiel and Faelten - a Pearlcatcher and an Imperial - started to compete from Auer's attention. The long and awkward wooing race finally ended when Auer decided to be paired with Eidiel.
After that the relationship between female dragons was sour for a long while, but nowadays they can get along, which is good considering they were trained to become the main Coliseum team of Seafoam clan. Faelten takes care of the largest enemies, but most of the time she works as the healer of the team and makes sure Auer is always in good health, sometimes at Eidiel's cost.
Later Faelten got her own mate, Davraseen. It was arranged by their parents and she seems to use her mate mainly as a throphy husband.