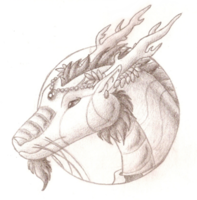 Davraseen moved to Seafoam clan after an arrangement made by his parents. Their intention was to get their son together with Faelten, another Imperial, to quarantee that their family lines will continue (and stay pure from other dragons). The young male reluctantly agreed to this, but it certainly didn't make him happy.

Davraseen and Faelten do like each other to some extent, but there isn't certainly much love between them. That's maybe why he spends so much time with his profession by trying to interpret the will of Gods and getting constantly frustrated by their unclear signs - as well as getting annoyed by her daughter's willingness to befriend such puny dragons as Fae Jade.

Bounty of the Elements and Tidelord's disappearance naturally also caused a lot of grief for Davraseen. It didn't help either that a young Guardian born right after the disaster, Gawaien, seemed to possibly have some sort of magical connection to the missing Water God, which is a blessing the poor clan priest could only dream of.