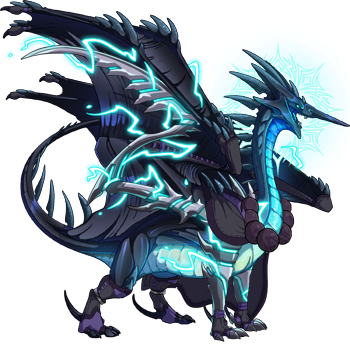 Nightblade was living by himself before he joined the Seafoam clan. One day he was hunting food for himself when he met Lienn and fell in love pretty much instantly. (One could argue the initial infatuation was caused by the fact that the two shared almost the same colours, but as the two did become happy together for real, it didn't really matter.) Very soon he made the decision to follow the light of his life and join the clan she belonged to.
Before joining Seafoam clan Nightblade claims he was actually a secret agent of Stormcatcher. As the Ridgeback loves stories and is quite good at cooking them up, no one is quite sure if it's true or just a big, fat lie.