I like cutesy things, im not really a fan of cyclops, robots, humanoids (Mainly cos i can't draw them) Orcs or demons. I love wolves and dogs, anything fluffy, cats and moon related things! 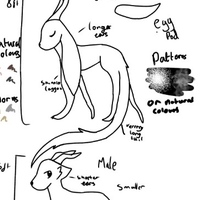 0 Votes No
0 Votes Yes
0 Votes Maybe
0 Votes Yes, but i dont have any money
View Results

Nyamafites are somewhat large creatures that live in forests or near mountains. They hunt animals like foxes, rabbits, birds and squirrels. Males can grow up to 7 ft and females can grow up to 10 ft, making females very tall. Every year, a female produces egg pods. Nyamafites are asexual but they can also have mates and have babies with them. They only produce 5-7 eggs every year due to the egg pods taking the female's nutrients (that is why they are skinnier). They also are not clones of the parents as the other eggs, not belonging to that female that laid the egg, can influence the colour.  Inside the egg there is a rare liquid called "Animae cibus" which is Latin for "soul food" or "food for the soul". Humans call it "cibus" and hunt down packs of Nyamafites to obtain the eggs. Cibus can be used in creams that make you look younger.To stop this from happening, the Nyamafites bury the eggs and guard them. Cibus keeps Nyamafites alive, if it is damaged or broken then the Nyamafite has a very slim chance of living. The egg is shaped like a horn and as the kittin (baby Nyamafite) develops, it splits into two and become the horns on the kittin's head. They do not have normal blood. It is an orange colour and it stores nutrients. Unlike humans, they do not need it and they could get their nutrients from eating or from the nutrient pouch. The nutrient pouch is something that forms in their body as a kittin. It has a lifetime supply of vitamins and minerals. There are 3 different types of Nyamafite, Ancient, Akin and normal.Ancient Nyamafites are sacred and worshipped like gods. They live for 17+ years while normal like for 9-12 years and akin for 13-14 years. Ancient usually have large, deer like horns and star like markings. Normal are basic Nyamafites that have basic markings and colours. Akin bigger and stronger than normal Nyamafites and they are usually leaders and alphas. Leaders control the pack and can fight with other leaders.  Alphas are like deputy's and can fight and defend the leader. When a leader is about to pass away. they assign a new leader out of the alphas. Males fight and hunt/forage for food. Females are respected and are given food before anyone else. All food is shared equally but if there is any leftovers it is given to the skinniest females. There are many Nyamafite females as the chance for a female to be born is 70% to 30%. Males  that bring home the most food have a chance at being alphas. Weaker or younger males sit and guard the eggs. Nyamafites also have a weak sense of smell so they rely on their excellent hearing and eyesight to hunt. 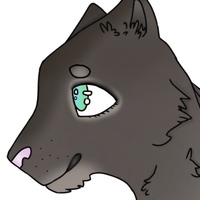 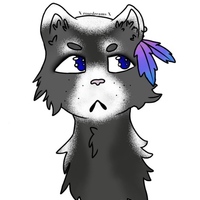 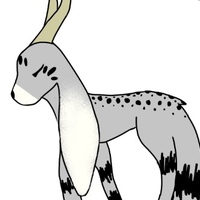 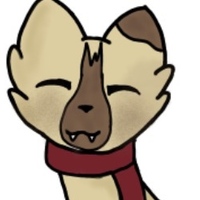