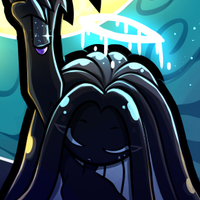 Posted 11 days, 6 hours ago by Crystallink

I love and highly appreciate gift art of any of my characters! However, if you're thinking of surprising me with art, I only ask that you don't draw anything from this list (Taken from my Artfight account):

If you have any questions about whether something you want to draw falls within any of the categories, please feel free to ask me!

Posted 10 months, 19 days ago by Crystallink

I now have a sale and trading account where all designs I'm actively looking to get rid of are! so if you've been interested in receiving any of my chars, just check here!


Due to some security concerns, I have now put my main account on private. If you're reading this, then congrats! You have been authorized to view my kids! :D

Posted 1 year, 7 months ago by Crystallink

Ok, so this is going to be a list of a bunch of stats that aren't in the official stat page, but they're something I like keeping up with anyways. Cause I'm weird. XD I'll probably edit this from time to time since my number of characters constantly fluctuate. Also, retired chars, species entries, and fandom sonas won't be included in these stats.

Characters Made By Myself
46