The Magnitude Fragments - primordial deities, the ethereal structures upon which the foundations of the world were laid, tied intricately to reality. Numbering only a mere thirty-three, they live high above the world of mortals - acting as custodians of Timelines, ensuring their continued survival.

After their murder of the progenitor deities, all of creation is left to them. Idealistic, though with a smidge of egotism, most have decided that the responsibility to end suffering for all lies on their shoulders. As such, they have dedicated themselves to enriching mortals' lives. Or, so they say.

Fundamentally alien, though good-willed, they navigate the world the progenitors left behind and their relationships with each other. Though united in their friendship and enamoured with creation, disagreements prevent them from unifying their vision for the future as a whole. Still, they all look onwards with the hope that, one day, maybe this world will be perfect. 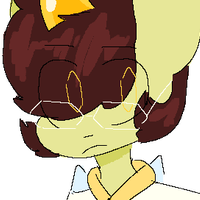 My partner Lunila owns three: Peresekat (cross), Peshchani (hourglass), and Strela (arrow). The other thirty Mags are mine.

They have an article here, discussing powers, history, identity, etc., in more detail.
Fusions are stored here. (Fusion is detailed in above link.)
This page details profile completion.

Numbers TH World is here. Some pages include worldbuilding. Though... it's a bit (a lot) of a WIP.
Numbers Website is here.