I really like your art style and how you draw your characters! While I don't have a lot of them myself, military characters are a bit of a weakness of mine and wow these are some of the most beautifully-drawn ones I've seen.

Thank you so much for your kind words and subbing! Your art is also magnificent and the way you use colors is truly breathtaking! I've wanted to reply to you in the fav. design game but always too slow to catch a turn. :'D

Ahh I'm absolutely flattered! I'll be posting there some more, it's one of my favourite threads :]

horrible screaming about how I love what I've seen of your characters aaaAAAAAA NICE!!

Hi and thank you very for the sub! I visited your page and it was a pleasant surprise to see Slavic theme on your OCs, too!

No problem! And yes, a lot of one of my stories is set in Russia :> I also have a non-military thing set in Bosnia.

Bosnia! Wow, it's great! Now I'm totally interested since I'm quite a big nerd for the culture and history of countries in the former Yugoslavia region (until the research on Russian armaments took all my time in the last couple of years XD). What's the plot is about?

It was a short thing I wrote for uni that I might continue at some point, about a bunch of characters in their early 20s in university dealing with the aftermath of the siege of Sarajevo - some aren't old enough to remember, but it still impacted their family, obviously. Former Yugoslavian countries are really interesting! The main character, I guess, is an autistic Bosniak guy.

I'd hate to indirectly give you a pressure but if you decide to continue this plot, please let me know! I love this sort of story dealing with characters' psychological effect from their real life experience! Indeed, the former Yugoslavian countries are truly fascinating. It's sad that a lot of people focus mostly about the wars in the 90's when there are so many unique and pleasant topics to learn about these countries. For example, recently it's such a real pleasure that Konjic woodcarving was acknowledged by UNESCO.

Concerning the Yugoslav Wars, I have an OC who's a Croat-Bosniak whose life has been directly affected by the war. His hometown was in the middle of conflicted area between ethnic Croats(his father's side) and Bosniaks(his mother's side) so it left him a really bad trauma. Currently I'm considering to revise him but I'm still not quite sure if I want to discard his psychological troubles (he tends to 'snap' and becomes almost mindlessly violent when he encounters discrimination and hatred based on ethnicities, even when it doesn't directly happen to himself, despite being a timid, peaceful person most of the time). On one hand I use his psychological troubles to present how the PTSD condition is a common problem among people who suffered from the war, but at the same time I feel I'm portraying people from this region in an undesirable light.

Hi and thank you very much for subs! :) Although lately I have been kind of staying off the APH fandom(due to...the conflict of Ukraine and Russia) but yes, deep down I'm still a fan! As for history, I'm no expert in particular topic if I have to admit. More like the 'jack of all trades' in various eras. XD

Aviation is something I like since I was a kid, because my mom often took me to the air force base in the country I live when they hosted an open house event once a year. I love both civilian airliners and military aircraft! Sadly, lately I haven't taken much time to learn about the newer aircraft since the navy warships I have to research to create OCs occupies most of my time.

Indeed, this conflict makes me understand why Himaruya sensei hasn't yet released the characters from the former Yugoslavia region(which is the cast I look forward to the most). The APH fandom I used to be active in the most was the fangroups on dA and it was disheartening when I saw some people drew both Ukraine and Russia (both are my fav. characters) to serve their political agenda. I feel wary that if I draw my own city OCs whom used to be close during the Kievan Rus era but now one is in Ukraine and another in Russia, this drawing might attract those political people to denounce my OCs' brotherly relationship.

That's fine! I'm only taking interest in warships just a couple of years myself. Same here, nowadays I only know about new Russian military aircraft mostly (since I have to research for my OCs project), newer military aircraft from other nations are the area I'm quite clueless. How long have you been into aviation?

And thank you for your kind words. :) Sometimes I'm still uncertain about the information I read because they're originally in Russian language and I could only survive by using google translate to save my life. :'D Thus I'm really no expert either.

Haha, same here! Hetalia helped me got into history, though it wasn't until I created my first APH OC, Valentin, that I really sat down and read history intensely. Before I started my AE plot a couple of years ago, I was mainly focusing my attention and energy on developing around fifty or so APH OCs based on cities in various European countries (mostly in the 'iron curtain' region because I'm particularly interested in this area). This is the reason I consider myself a jack of all trades in history because I mostly know about Slavic countries from Roman era to present day but haven't really studied countries like France, the United Kingdom or Spain. x_x

I'm somewhat a casual shipper(? if there is even such thing? XD) and usually keep my ships from the fandom because ship wars in APH fandom can be so destructive sometimes. I like GerPru and 3P Lithuania-Belarus-Russia (though more on the aspect the it's almost a circle crush with Lit crushing on Bela and then Bela has a crush in Russia, not much on the Rus/Lit part). 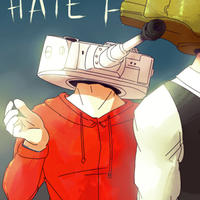 Hi, thanks for faving my dudes! :D

You're welcome. :) I really love them! They are a really interesting (and likely fun to watch) trio. That art of Kyrill and Kostya fighting while Kliment is cheering with money in his hand got me smiling for quite a while. <3