My passion project, my baby and the source of a lot of anxiety. This folder contains npcs and creatures for my Shifters of Ascea Tabletop game that's in the works. This folder is mostly for image and concept storage since most the actual info is organized in my google drives but feel free to browse to get a sense of the atmosphere of the setting.

Over a thousand years have passed since the magical cataclysm that wiped out one of the most prolific races on the planet, humans. Few know the true reason for the cataclysm save those long lived few remaining that were there for it.  All that is known is that the magical leylines that exist in the world suffered a surge that ruptured the major leyline between the current lands of Prainea and Thoelia filling the lands with an overflow of magical energy.  Humans being one of the few creatures to not be in tune with nature enough to possess their own fibers of magic anymore were overwhelmed and reduced to dust. Some creatures with small amounts of magic were empowered by the surge while those who possessed large amounts of magic became even more powerful in this world free of humans.

Dragons, griffins, saurians and similar magical creatures began to claim their own territories in this new world free of man forming civilizations and taking claim of the lands they had been forced out of.

The world of Ascea now consists of several ruling states and a vast number of independent nations and tribes.  The nations that consider themselves “civilized” and to be the predominant ruling forces in the world are Eflen, Uthodon, Thoelia and nations of the Sky Island Coalition.

The world seems in general peace in these times but the those intune with the leylines sense something amiss with the magic of the world. 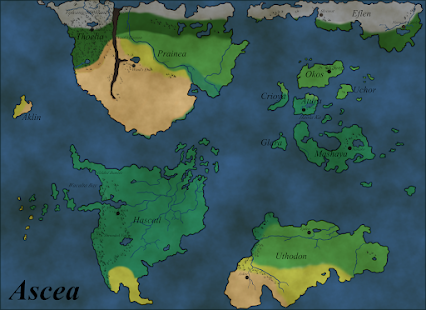