Aquatic life featured is based on species commonly found in mangrove swamp biomes! The golden Dragonfish is based on sciaenops ocellatus and Lemon (shaped) Sharks are a play on actual baby lemon sharks who nest among the mangrove roots.

The Pale Koi and the Hundred Eyed Fox 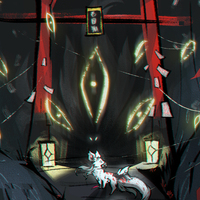 The beginnings of Akilah's journey to becoming a merchant. :^)

I've been getting an itch to write again lately and since I didn't have time to make an illustration for this prompt I thought I'd try my hand at writing for a change! It's been.. a very, very long time since I've done any creative writing so please forgive me if it's not great. xD; (I'm talking at least 12 years) After rereading it there's quite a bit I'd change with the style but for a cleaned up draft written in a couple hours I think it's fine. <3

This one is featuring my little fluff Kai and his mama! I didn't want to write her too much since I didn't know much about her so I hope what I have is alright! And in case it's not obvious Kai's new year's resolution is to explore the world, starting with Kyendi! I thought it'd be a nice little prelude to his quests since they're all going to be set there. Gotta get my boy some Inner Fire. > v>