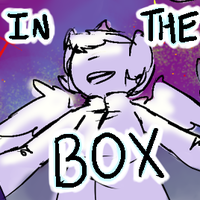 These things don't happen in-story but are in both character's backstory and are significant in understanding what they're doing and why. Full explanation is in author's notes at the end, as most of it's simply implied/hard to pick up on unless You Are A Lore Nerd.

If you don't care about the backstory it's just a story about someone regretting coming home and wanting to re-escape responsibility, lots of moping, mostly exercises in trying to write environments more. Sihreen deals with a surprising offer from a neighboring country. Peaches contemplates his position, his life, and the circumstances around him.

[MAG] The Creatures All Know

Warnings:
∗ The 'sexual content' is innuendo and an allegory scene. There's no actual sex or anything.
∗ Intrusive, violent thoughts.

Who would you have been, without everything that happened to you? What would you give, to become that person?

Story follows And The Thing About Being a Bug and House of Liars.

[MAG] Habits of your Mind Dij/Kolo fluff, exploring a castle and talking. Their bread and butter, which is basically monologuing at each other. (They like it.)

Mild warning for some innuendo but it's Dij and his wife, what did you expect?

[MAG] Through All Discolor in my Mind

So I asked again / when I get home can I build space?
And clear these ripples of disorder / and erosion, I feel nipping mad

[MAG] Feed on the Traces

Did you know Prizma and Linija were big-game hunters? Yeah, I didn't either.

Warnings:
∗ Use of r-slur, copious swearing on top of that
∗ Vomiting
∗ God fucking damnit Prox the last story was so wholesome

Down below a statue, people stand in poses / Making good impressions, vertical delights

[MAG] Tonight At Our Beach

Dij makes a new beach to hang out with Kolo, Jedana goes swimming, Affine has a crisis, and Vodo runs a popsicle stand. It'd be a normal Tuesday if Mags knew what a Tuesday was. Probably.

For once there's no warnings or anything. Wholesome!

Yeah, okay. Sorry about your shirt.

[MAG] Sunset on the Slums

Warnings:
∗ The boys are... fight...ing?
∗ Every other insult out of Juice's mouth is sexual and implies sexual assault

This went some places.

Warnings:
∗ Kolo is pretty explicitly fantasizing about being abused as a form of pleasure.
∗ THE GIRLS ARE FIGHTIIIINNNNGGGG

You ever try boxing?

Problems arise when Sessy sticks his nose where it doesn't belong.

[MAG] I Keep the Curtains Tied in Knots

Trapetsiya has been up to some things that concern Kolo.

Who are you, to think you get to dictate anything about anyone else?

Sequel to Keep a Secret and Grieve in Blood.

[MAG] And The Thing About Being a Bug

Dijamant drags Kolo and, accidentally, Zehneck with him on a personal quest of dubious importance. (Don't read the cast list... spoilers...)

Spoilers for Keep A Secret, The Vote, & What Will Happen to the Stories from the Bogs.

Tabel Ink discovers there's a little speedbump with his project, and sets off on a quest to fix it. He bumps into a few people on the way, including some new friends.

Cogito searches for Cleverly after he's been cast out from Gemline.

Tabel Ink requires approval from the colony leader for a controversial experiment he wishes to conduct.

[MAG] What it Means to be Good

More personal/a vent than anything else. Working through complex weird shit. I won't be bothered if you don't want to read this semi-ramble of a mess. Not really fully-thought-out. This is a lot of words to justify posting vent writing on Toyhouse (sweats)

"I think it's kind of gruesome," Chetyre awkwardly said, shifting to slide his hands into his pockets, watching Linija flop onto the highest stair. The birds still chirped, far overhead, circling in the small clearing. "The idea that power has to be tied to... death like that."

[MG] What Will Happen to the Stories from the Bogs

Dijamant finds a book he wasn't supposed to read in Kolo's library.

[AZ] Through the Mud & Cleaned

Libra, Aquarius, and Cosmia head to one of the Untamed Plains' checkpoints.