Posted 2 years, 5 months ago by hitodama

This is something I should've likely written about three years ago, but better late than never, I guess! ='D It's about the request and art trade statuses mentioned on my profile page (RPs already got their post at some point and for commissions I really should also write one later). So, without further ado:

I'm almost always open for requests! However even if I'm eager to hear what you would want me to draw, me actually drawing it is never quaranteed. It depends on my motivation, the subject offered, the politeness of the person making the request, the phase of the moon... The same goes for the style used in the possible art piece. I may draw you a sketch, a doodly but colored art piece or in rare cases even a full illustration. Because I'm not a well-known artist I never get that many requests, so your chances of getting at least something from me are pretty high. All I ask is that you remember these things while sending a request:

I don't have specific restrictions on what I will or won't draw, but naturally I'm not that good with things I've never drawn before. There are more links to my social media accounts on my profile, but here's for example my Tumblr's art tag if you want to see what sort of art I usually make: https://hitodama89.tumblr.com/tagged/sketch I of course also retain the right to decline a request if the subject makes me uncomfortable, but that should only happen in some really extreme cases. (So far I've never had to pull this card out.)

Everything I wrote about requests also applies to trades. Other than that I pretty much categorize trades into two different category:

On top of normal art trades I have also done some ACEO/ATC trades in the past. (I think all of them can be found here: https://www.deviantart.com/hitodama89/gallery/39880671/aceo) They are generally a lot of fun, and I would love to do some in the future, too! In these trades you'd just need to be able to give me some sort of address I can send my card into as well as be willing to send your card to me.
7 Comments 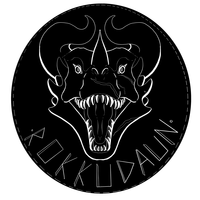 https://toyhou.se/Sekira/characters/folder:1181401
I am having my two esk boys here! I would love to do a trade with you!

If you like, you can dig through some of mine!

As in... For what reason? =0 To draw something? If yes, a request or trade or something else..?

Okey dokey, I'll check them out!