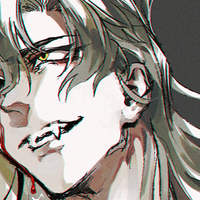 May is Ehlers Danlos awareness month, and also the month I set for myself to "come clean" in a way about my physical conditions... Not for the sake of pity, please don't pity me I'm really tired of it LMAO it's more of a sense of. I'm tired of pretending that I'm okay. Really tired of trying to mask that I'm not very disabled. Tried for so long to seem that I'm not, that I'm capable of everything that non disabled and non chronically ill people can do. I really can't, and starting about last month or so I decided to integrate that into my bios on various places like here, Twitter, Instagram, and even my Etsy because I can't fulfill orders as fast as I used to.

So, I have Hypermobile Ehlers Danlos Syndrome, Arthritis, Fibromyalgia, Thalassemia, etc... Other stuff is kinda a lot to bring up and I don't wanna list all my diagnoses online. Am gonna avoid anything that's not physical health.

EDS is a lifelong genetic thing along with Thalassemia, but I developed arthritis and fibro at 18. I could have had fibro for longer, but I'm not entirely sure. Basically, my body's kinda falling apart at the seams. As of now I use a finger splint for drawing and a cane for mobility, but mobility especially is severely limited now. I get sick when the wind blows. I went out recreationally for the first time since you know what last month, otherwise it was doctors only. I ended up getting the flu during all this when I never went outside, I shit you not.

Since it's a rare thing, I feel the need to explain EDS a bit... There's 13 types, but I have the hypermobile one. Somewhere down the genetic line my DNA did a fucky wucky now my collagen came out wrong. So I can extend things like my limbs and fingers far past what I should be able to do. It heavily affects the skin and more importantly, my connective tissue at the joints. So a common thing is laying in bed and waking up with one of my legs out of the socket or subluxated because it relaxed too much and slipped out. It comes with other things, but those are some of the main traits.

Arthritis is also a pain, I'm constantly swollen and I can't do much about it. Fibro doesn't help either. Everything hurts, basically. Thalassemia is an Italian blood disorder that I so graciously got from my Sicilian heritage LMAO but it's permanent anemia. I get iron IV juices every once in a while because my average hemoglobin is 10, which is pretty much what 8 year olds have. Adds onto the extra tired. Always tired. I'm bedridden a lot.

I'm allergic to all normal pain meds that are classified as NSAIDs (IE Tylenol, aspirin, Motrin, etc.) so I have to take stuff that's a little heavier and also. I can't take medicine for any of this. I can't take arthritis medicine, anything for fibro, and nothing exists for EDS. My only steps are biologic injections and chemo, and I'm not ready for the fallout of either of those when I'm already insanely fragile. I've taken non-NSAID options already, they've almost killed me.

Basically, all of those team up against me in terms of art the most.

It's gotten progressively worse since you know what has closed everything and made me terrified of going out... At the very least, I'm now fully immune. But prior, it was too risky too see doctors too often. I went to OT a few times and had to stop because I get sick so easily, but I'm starting to go back soon. My doctor there gave me the splint option for my fingers, which I can show below.

I held pens like this for my entire life (on the left), up until getting a metal splint about 8 months ago: 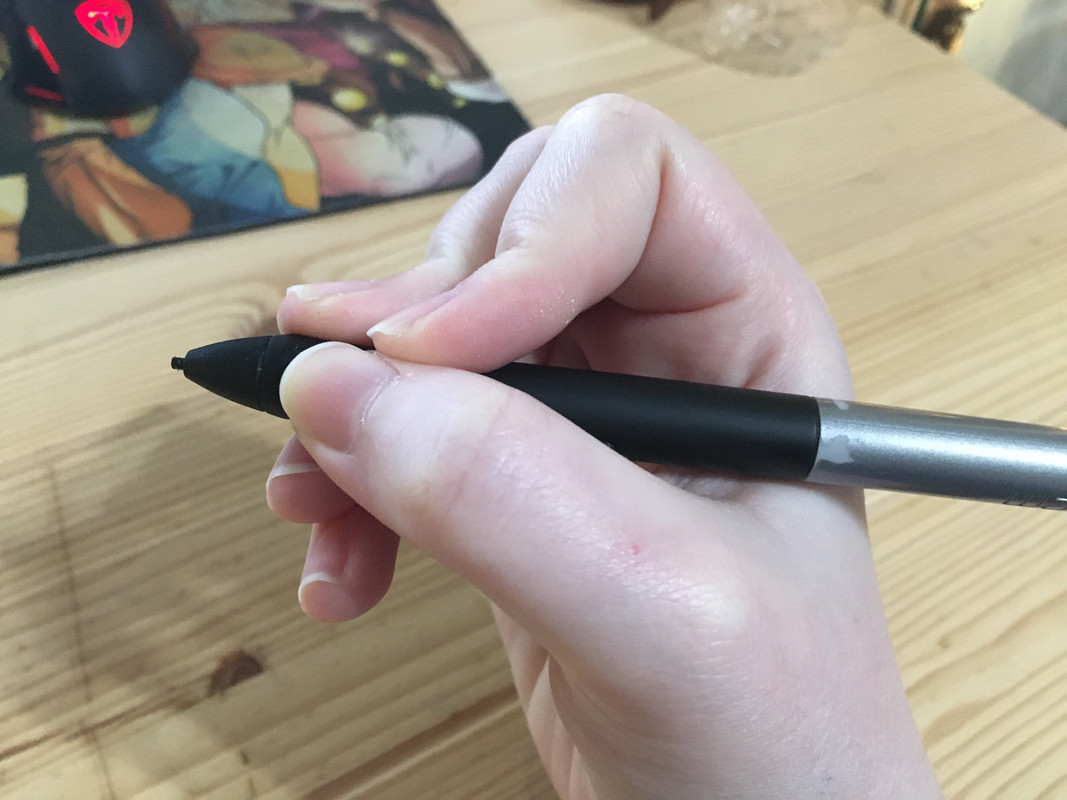 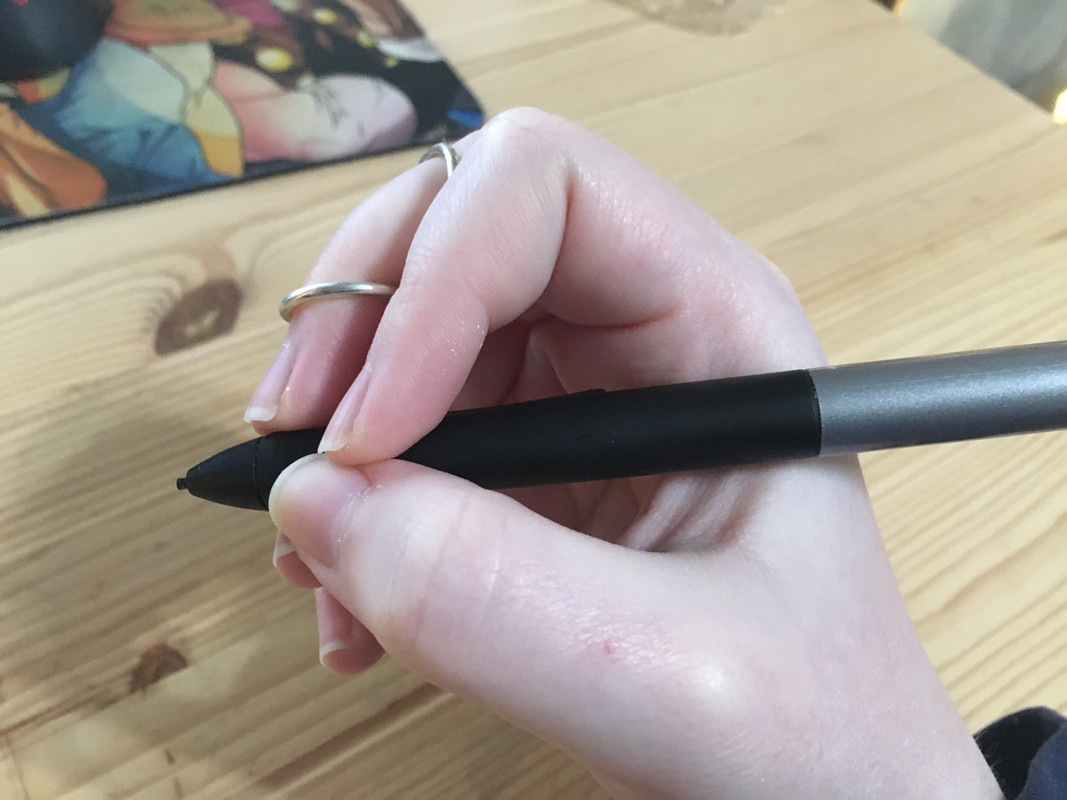 So... Yeah it's not great. I had no idea holding stuff like that and being too flexible and constant, never-ending pain as a kid wasn't normal. Kept bringing it up to doctors, but they brushed it off until I got a formal EDS diagnosis summer 2020. Supposedly a ton of other people with EDS are told the same, that it's "growing pains" even though you're not supposed to be bedridden from pain.

I even decided to give a character who still needs a design EDS because I'm kinda... Tired of being seen as weak, even though I absolutely am. He's the last character in my writing project, the big boss.

What I aim to accomplish with saying all this... Not really a lot, to be honest. It's less of a pity party and more me admitting to myself that I can't operate like I used to before I hit 18. And also kind of a plea for y'all to know why I'm not posting or drawing as much. Commissions especially have taken longer, and I think going forward I might implement a slot system. But to those who comm me, I'm sorry I take so long.

More than anything, I really love meeting other disabled and chronically ill artists. It feels like it's finding a needle in a haystack and it's comforting. I hope this resonates with someone.

I'm disabled, I'm chronically ill, and I'm not gonna let it keep me from doing what I love. Even it just takes me longer to do it. I won't attempt to hide it anymore.

ETA: I've also posted this to IG with the fundraiser option to go right to the EDS society, it's severely under-researched so they need as much reach and donations as they can get.

ETA again: I forgot another chronic thing I have is Hashimoto’s Disease, basically a fucky thyroid. After all sorts of false negative tests I finally got it figured out and medicated since last year, at least?

I sound bonkers I know but I got so much going on I tend to forget. Memory issues!! I'm so, so happy you were able to talk about this and felt ready to be up front about it. It's really a shame that we're in a situation where someone has to explain they're disabled and what their disability is in order to be understood or given any leniency, but it's also really empowering to be straight up about it and own your disability. So happy for your formal diagnosis! EDS gets ignored and brushed off a lot, as well with it being so under-researched even when you know what you have it's hard to find anything of use except from other people who experience it.

My partner has hEDS too so it always gives me that needle in a haystack feeling seeing someone else with it and being able to remind them they're not alone. They don't post art online really but they do a fair bit of drawing and also work a lot in theatre stuff (which can be really tough at times because it's such a physical field) and it means so much for people to speak up in spaces where a certain amount of physical ability is assumed to be default. So good to have more visibility for disabilities not preventing people from entering a field or hobby but rather that people can still be a part of it, there's just a different process behind the scenes :)

Feel free to ignore this if it's overstepping a line, but I know my partner has really benefited from a pair of compression gloves, so that could help your hands alongside the splint! And biofreeze is great for treating aches, I help my partner with it when they get home from work and it seems to help a lot.

It sucks to have to say everything I have but also in a way I hope its like... Comforting, in a way? To others at least. I've already seen another person on twitter follow up with it and it's nice being seen and feeling like I spread at least a little awareness (and raise donations). I'm not really insecure about what I have per-se, it's more me being insecure that I can't do as much as I used to/compared to others ESPECIALLY in the artist alley scene who churn out whole merch lines in a week when it takes me months. I'm jaded to what I have, it's become a part of life until I start to get weirdly existential (from depression, probably)

Yessssssss I have such a hard time finding info about my own illness that even the doctor that diagnosed me had a follow-up appointment about it and they just said "well did you google about it".... they don't even tell me a lot of what comes with it besides "pain and flexibility" its bonkers. even the doctor, man. It's only been a few days into May and I've learned a lot from others with it that are just, things no one talks about really

I'm glad there's other people out there who draw with it! Ironically it feels a lot of people who end up diagnosed late have physically intensive jobs or hobbies... I've only ever met one other person IRL with it, and they were the one to clue me into it when I passed all the tests and they had a horrified look L;KJFDHSGJKLFDG
I've met plenty of other artists with chronic illnesses and disabilities but any type of EDS really is rare... instant brotherhood

I do have compression gloves! They're just too thick for my finger splint so I gotta alternate. Will definitely look into biofreeze I gotta lock those joints into PLACE

Thank you so much for your sweet comment! It means a lot to me.

Literally nothing can stop me from drawing my dumb anime men. Disability wishes it could stop me. I'm too hot