Welcome to the World of Ven!

This is the world of Racer Raptors, an amphibian closed species moderated by me (If you would like to apply to be a moderator, PM me). They have simple designs, but they have lots of lore. I put MYO's up every once in a while, so check out my characters if you are interested.

Mutations are traits that you can't obtain with a common, uncommon, or rare MYO.

- Dwarfed Raptors (Raptors that are only 3 feet tall, and have longer tails)

- Bioluminescence (Racer Raptors with glowing spots on them)

- Permanent Gills (Racer Raptors who have gills, and can live underwater if the want.)

- Robotic (Not Raptors, but robots made by inventors to impersonate raptors. Just raptors but metallic, who don't run as fast)

- Admins can submit ideas for mutations

Are you curious about what each job means?

Swimlillie Watcher
The watchers of the eggs and the newly hatched racer raptors. This is basically the minimum wage subway worker of the racer raptor world. But no one looks down on them in the same way.

Medic Trainer
These guys were trained like normal medics, but instead of becoming actual medic, they opt to train new medics.

Robotics Manager
They go out to the farming fields and other work sites to watch the robotic arms and such, and repair them if they malfunction.

Medic
These guys are the racer raptors that take care of the sick and the injured, they get trained heavy training, and are revered by the population.

Slipper Trainer
These racer raptors are like teachers to the newly adopted slippers. (the term for swimlillies that water). They do things like teach them how to read, and basic arithmetic.

Speed Racer
A speed racer is a racer that participates in Speed Races. Speed Races is a 75 yard dash across a flat field. You are supposed to run as fast as you can. The current record holder is Ajax, a green and blue racer (owned by Ajax_Dino on Toyhou.se)

Inventor
The creators of the technology in the world of Ven. They make robots, genetically enhanced plants, and portals.

Endurance Runner
A racer who participates in Endurance Races. An endurance race is when Racer Raptors run as long as they can until the pass out. The current record holder is Spritz, at 475 miles before she past out

Emergency Medic
Medics who stay on tracks to take care of pulled muscles and other ailments along those lines.

Lore Keeper
They are selected at a young age to remember everything. They keep track of all history, from Slipper race placing, to all out wars.

Since Racer Raptors are amphibians, their Young Ones

They start out in the water. Racer Raptors lay 1-5 eggs in one clutch. When they hatch, they live in giant lakes, and swim around, as they slowly develop into racer raptors. These water dwelling babies are known as swimlillies. Once the swimlillies leave the water, they are not fully developed, so the have longer tails than usual, and they have very dilated pupils. These guys are known as slippers. On there 3rd-4th year out of the water they become full racer raptors, and choose a career path.

Racer Raptors are extremely technologically advanced. Some of their inventions is a massive robotic arm that plants, waters, and harvests crops. (Don't worry, they do not have any AI, they only follow code). Some bio technology they made is a breed of blue colored grass. This grass is special, as when walking on it, you gain an energy boost. This grass covers most race tracks, especially for endurance races. Some other smaller inventions, such as collars that measures speed, and energy levels. One collar is to measure jumping heights. (If you would like to add an invention to the racer raptor cannon DM me).

The Racer Raptors have a deep and in depth history, so instead of writing an essay, here is a timeline.

-The record for Speed Running is held by Ajax, owned by Ajax_Dino . Ajax ran the 75 yard sprint at the speed of 274 Miles per Hour.   (For reference the average Racer Raptor speed is 230-240ish)

-The record for Endurance Running is held by Spritz, owned by me. Spritz ran for 4 weeks and 2 days (Bit over 1800 miles).

Can Racer Raptors have families? Can they have siblings/half-siblings?

Racer Raptors adopt a random Swimlillie, so your family can be as big as the number of MYO's you have.

Can Racer Raptors have a different job other than the ones above?

Can my Racer Raptor hold a record?

PM me with the record you want to hold. If it isn't already taken, the answer is most likely yes.

PM me or post in the comments with any further questions you may have. 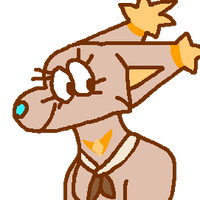 Askata hmmm, well, can I take a look at some of your characters?

Sure! I'm really only taking offers on theses babies V

Askata None of them caught my eye... when you open back up for commissions, let me know if you are still interested.

Ember_Flame A slot to make your own character of a closed species.

@akwardtrash sure! Let me send it over

i see that the free MYO has closed, but i'm still rather interested in the species. how much is an MYO in amino coins?

julydreamz depends on the rarity, but a common myo with no mutations starts at 250 amino coins.

Tropical_Dino gotcha! what amino can i contact you on?

julydreamz same user as here. Adopts amino or furry amino would be great