How to get into the CS design mindset?

I really, truly love all the weird and wonderful CS designs with fantastical features, but when I try to design one myself, I find myself trying too hard to make it make realistic sense. Like, I adore Ice Cream Cows, but when I try to design a creature like that, I just think "how the heck does this genetically work? wouldn't it be horribly messy?" Does anyone have any tips for letting go of that mindset? Getting more into the whimsical? Or, alternatively, making a species which looks whimsical but DOES make realistic sense? 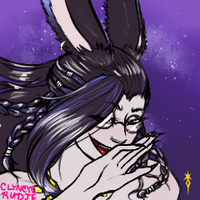 I find that there are three options when you get brainstuck like this:
1. Discard realism entirely. Don't let yourself worry about the genetics or anything because it's magic, who cares, let your dudes have detached limbs, glitter breath, and soft drinks as heads. This is easier with things that look less like real things, I find.

2. Embrace realism, hard. Whether it's to the extent of tracking genetics is up to you (I've seen realistic species that don't do that), but a good tip for if you do do that is to look at how genetics of real species work and decide what traits are dominant, recessive, if there's incomplete or co-dominance, all sorts of things. Don't limit yourself to just animals there, either; if you want whimsy with a realistic species, consider symbiosis.

3. Robots (or golems, or animated snowglobes, whatever fits). Genetics and evolution stop mattering when it's literally created and doesn't reproduce. Related to point 1, save that you can let yourself worry about the realism of balance and stuff.

Oh, I quite like the symbiosis idea. Like, we could have a functional mammalian species which hosts a microbial species or has a psychic force field or something which takes shapes that just happen to look/feel like inexplicably non-melting ice cream/permanently attached stockings/whatever. Somehow that feels less hard to suspend disbelief for even though it doesn't really make any more sense... I don't know. Now I'm just back to the "cool things have all already been done" problem...

I also like the idea of a species which has colouration/markings resembling food items but isn't actually made of the item, sort of Strudel-like, but again, their imprinting on a food item thing has already been done.

BTW, what do you mean by "things that look less like real things"?

Another note, doesn't matter if it's "been done before". Your version of x mixed with y, could be a totally new take.

Example, I'm working on a species that has x physical trait. I've seen another species do this (one I want to eventually make actually), and thought "maybe I shouldn't so I'm not seen as a 'copycat'."

But my friend told me that there's only so many ideas we all can come up with, there's bound to be some overlaps. And just because it's one aspect someone else has done, doesn't mean you can't do it.

I go with hard realism by designing the world, system, or weird trait first, and then the rest of the species around it. For the traits that don't matter, I fill in whatever I like to draw.

I find it creates a much more holistic effect than trying to mash two unrelated things together, though it sometimes turns out that way, like teapot-pangolin, a creature with an water absorbtion cavity on its back, that extrudes dissolved minerals as entegument. It places things into the water, covers it with a clear lid made of extruded silica (like the eye plates of trilobites) and sits in the sun to heat the water, boiling the nutrients out into the water, which it then consumes.

I wanted to make a container animal that strapped on a lid with a sash, and that's how it turned out.

Think about how it works first and how it looks will fall into place, I guess. You just have to let go of preconceived notions, like how earth animals eat solids, have all the sense organs on one bulb, and are covered in keratin,

Idea that immediately sprang to mind for flavour creatures using that method would be a carnivore which lures its herbivorous prey by smelling/looking like fruit, but that might be too dark to be popular.

What I meant by "things that look less like real things" is that the more removed from a species that exists in reality it is, the easier it is for me, personally, to break from hard realism. Something that is close to a cat is harder to disassociate from the idea of "Cat" than something that bears no resemblance to any one thing.

I think it's good to keep in mind that real life animals are also pretty ridiculous. Like, evolution doesn't produce the most "logical" or "realistic" designs, just the ones that happened to hold together long enough to reproduce. Plenty of animals have completely useless frills and baubles because their ancestors found it sexy. There's a nudibranch that smells like watermelon candy as a defense mechanism. Not every trait has to have a good reason for a creature to be plausible; sometimes that's just how it happened. Researching weird animals can be a good source of inspiration too!

Yeah, I meant like it wouldn't be likely for a species to evolve with cloth or desserts as actual parts of their bodies, and I love the look of things like ICCs but I'm always wondering how they don't leave a horrible mess everywhere they go :D

I like to imagine that flavor creatures exist in a magical candyland where everything is made of food and the alternative laws of physics don't allow for melting, smearing, sticky, messes. Also, there are no bacteria or fungi, so nothing ever rots.

That'd work, but I struggle to get into the "magical candyland" mindset. I've been taught by previous writing courses that even magic has to make some kind of sense but I'm not very good at making magic systems...

I'm not really wording this right but I think I'm looking for something like Springdragon suggests, a singular system which semi-logically explains a weird feature.

The system does have to have consistent internal logic to make sense, but it doesn't have to agree to external laws.

Think about outer space for example. On Earth, gravity affects most of our experiences, but in space there is none. A story set in space is still perfectly believable, even though it is different.

If you create a fantasy world without gravity, you don't have to explain that it's set in space. There just isn't any. As long as it works consistently, the reader will be able to intuit the rule and it will make sense.

Similarly, you can't bring a candyland character into a realistic world without explaining, because it breaks the rules.

Worlds don't have to be separated into animate and inanimate, plant and animal, predator and prey, into species that have spines and metabolize and breathe and remember or into species at all. You can break any rule that you want as long as it's consistent enough for the reader to understand.

Maybe I just need to read more Carlton Mellick. I love seeing other people do whimsical, I just struggle with it myself... The symbiosis-with-thing-which-resembles-inanimate-object might be my best bet of the ideas so far.

Appendages and eyes in weird places I can do no problem, but that's a little limited. Hm. The idea of a creature which uses dessert body parts to lure prey amuses me and now I'm thinking of using that for a "snackubus".