Please see this tag for examples of Pegasi.

If there is one thing pegasi are famous for, it's their incredible xenophobia. Inherently extremely distrustful of the other races, pegasi are very isolationist and tend to prefer the company of even stranger pegasi compared to their non-pegasus family members. Most pegasi are part of the Flock, the unspoken cultural ties that every pegasus shares with each other. Within their own race, pegasi are astonishingly comforting, helpful, and selfless, going out of their way to assist other pegasi when needed and tend to their needs. Communities of pegasi are some of the safest, most generous, and well-kept communities in most Universes... at least, to other pegasi.

The core ideal behind the Flock is that pegasi, at their most base level, are affiliated with flight. Flight is the cornerstone of pegasus culture, and a pegasus that cannot fly (i.e. did not pass their flight test) is culturally shunned. It's not that everyone has to be the best, fastest flier - no, pegasi just have to have some flight capabilities at all. This allows wriggle room for those born with disabilities (small wing mutations, for example) to still fit in with the Flock, but shuns those who don't care about their race's characteristics and who would weaken the bonds within the Flock. 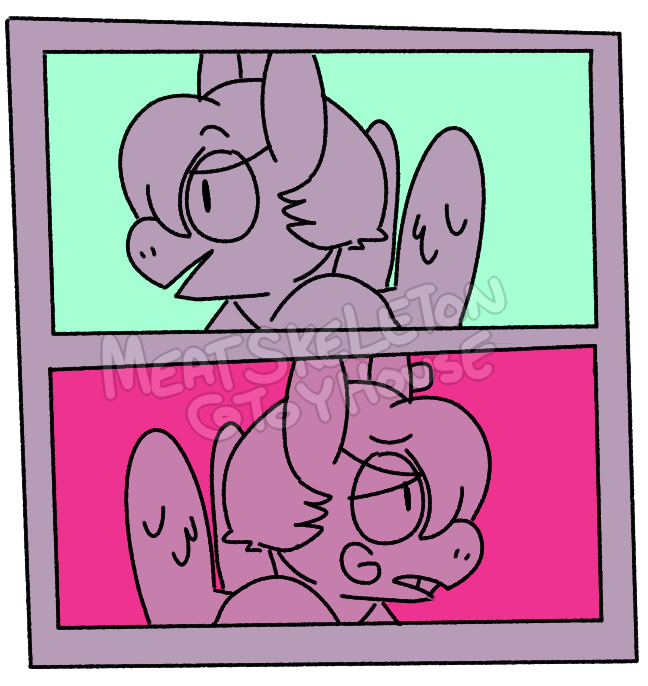 This adoration of flight is instilled in pegasi from a young age; between the ages of 16-20, teenage pegasi are expected to take and pass an extensive exam consisting of over 100 multiple choice questions and then a basic flight test afterwards, to be judged by three government-certified adults. Two of the five available grades, P and E, are considered "passing" and have no negative repercussions for either. However, G, A, and S are "failing" grades, and the pegasus is punished accordingly by having their cheek branded with their grade and wings clipped. In some societies, the passing grades have been extended to allow for G-grade students to avoid the punishment by retaking the test a year later, although this is not quite universal.

The test is often the focus of a young pegasus' life, spending their younger years prepping for it and pouring over the countless study guides and classes offered on the topic. The test itself is not extremely difficult; it involves a simple takeoff, loop, some mild weather manipulation, and then a landing. Still, the test is so over-stressed in pegasus culture that many of the failures are due to nerves and stress rather than an inability to fly. Pegasi who fail the test can still graduate high school or college, but will be ostracized from overall pegasus culture due to their cheek branding.

Another important pegasus culture facet is that of weather manipulation. Like all flying races, pegasi are able to sit on, build on, and live on clouds and in the sky, but only pegasi have mastered the art of creating weather to sell in factories and to control natural phenomena. Anyone can copy their recipes after they're first discovered, but pegasi are capable of manipulating weather with their bare hands and movement, making them especially equipped to deal with disastrous weather crises. Some people have reported that pegasi are capable of influencing phenomena that are not strictly weather-orientated, like tsunamis, and it's unclear where the line is. Most pegasi tend to go into weather manipulation because of this, but can also be found in any activity that requires their special set of skills.

Of the other races, pegasi find unicorns to be the most annoying and aggravating, and go out of their way to avoid them.

As an Anbinary race, pegasi are capable of reproducing with any other sexed race. They are mostly monogamous, although they raise their children like a village and will tend to the needs of another pegasus as long as they don't appear to have a cheek branding. Overall they're very affectionate among themselves, often cuddling, snuggling, and lying around in big piles of feathers. (Unfortunately, as soon as an individual of another race appears, this pile of feathers turns into a startled fluttering of screeching, angry pegasi).

Family is important, but the Flock takes precedence.

Typically, pegasi pine after their object of affections, leaving them small anonymous gifts and hopelessly watching them along from afar. Pegasi are, of course, used to this behavior in their own circles and so pegasus/pegasus couples often are quickly found and sorted out, but pegasus/other races couples may take a while to realize the pegasus is even interested in the first place. When confronted, pegasi tend to not tell the other their feelings, and often will turn aggressive if they're continuously hounded. This aggression will last and turn them off entirely from the relationship.

They hybridize easily and usually pass on their wings and downy backs to their offspring. Children can, potentially, have up to three pairs of wings (six wings overall) should they have the correct heritage for it, although a pegasus/pegasus couple will always produce a baby with a single set of wings (two wings overall). The Flock doesn't discriminate against mixed-heritage pegasi children, as long as they can still fly. If they can't fly, then they aren't a part of the Flock, simple as that.

It's rare, but not unheard of, for pegasi to bring their non-pegasus partners into their communities. It is generally frowned upon, however, as many pegasi doing such a thing weakens the integrity of the community as a whole, and many arguments are had about this by organizers.

Pegasi are characterized by their short stature and massive wingspan. Generally, ranging between 4 and 5 feet, they're one of the shortest races, as flight is made easier with less weight to lift off the ground. Taller pegasi are uncommon, but not totally unheard of; however, they generally have more difficulties flying and have oft-unwieldy wingspans. Wingspans are always around 2.5x the pegasus' height in length; this is to ensure they have enough surface area to catch drifts while flying. 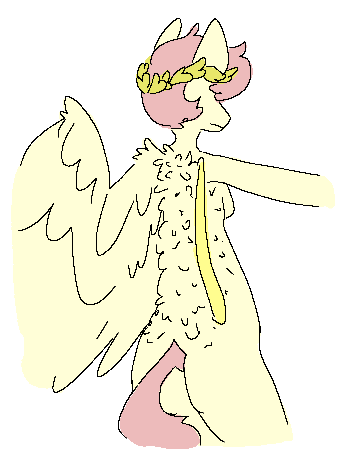 Internally, pegasi are incredibly aerodynamic. A mixture of air sacs, lighter bones, and several fused bones allows them to take off much like a bird would, although they tend to depend on updrafts and winds to help them fly. As passive soarers, they have massive wingspans and do best when launching off of high places to catch a breeze. Due to this, pegasi tend to congregate around heights - the tops of buildings, trees, and mountains are often popular pegasi nesting spots, where discussion and conversation occurs. It's not impossible for a pegasus to take off of the ground without a wind: they're capable of short bursts of flapping flight, especially from the ground, although this is quickly exhausting and not preferable.

Their backs are covered in a layer of feathery down surrounding where the feathered wings attach to their bodies. This down is remarkably soft to the touch and some circles purposefully pluck the down from pegasi to create soft pillows and blankets. This down is passed onto alicorn children, and is a feature of all feathered, winged races. Wings connect down the entire body, beginning at the shoulder blades and ending slightly above the rear. Wingfeathers are akin to a passive soaring birds', and require a tight schedule of preening and maintenance to keep them pristine.

Preening is an incredibly social and intimate activity for pegasi to do; using glands located in their mouth, pegasi will clean each other's (or their own) wings with their mouth, pulling out dislodged or dirty feathers and settling clean and healthy ones back into place. To maintain healthy wings, preening should be done at least weekly, but can be done more often if a pegasus wishes. Those with larger wingspans, understandably, will have longer preening sessions. Preening is mostly done between partners, close friends, or as a sign of respect to someone of higher authority, but can be done as an aggressive sign of dominance. The shed feathers are discarded or sold to create fake wings or pillows/blankets.

As all pegasi are anbinary, they have breasts, testes, and ovaries. Male pegasi tend to bind their chests or pay for reduction surgery, although binding while flying is typically seen as dangerous. Regardless of personal feelings towards them, pegasi tend to have small busts.

It's popular to keep the hair and tail cropped short, in order to make flying easier. Glasses are specially-made to stick to the face during flight, but some pegasi may choose to wear goggles. 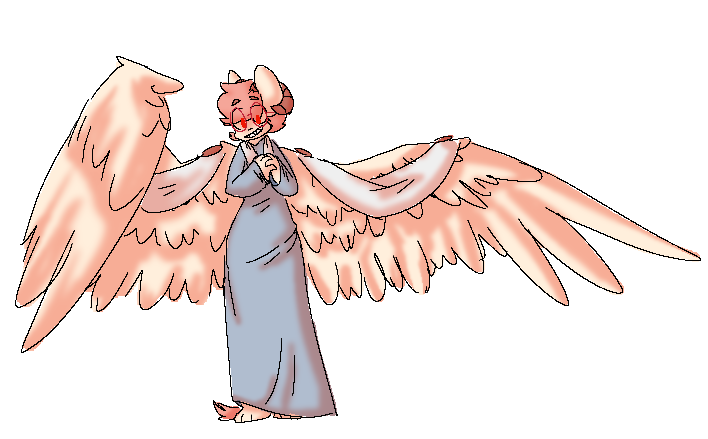 Pegafey are rare genetic mutations where, without any Chimera, Whale, Ant, or Underworlder ancestry, a pegasus' wings resemble some sort of insectoid wings. They generally have a harder time flying, but are not discriminated against or for in pegasus culture. 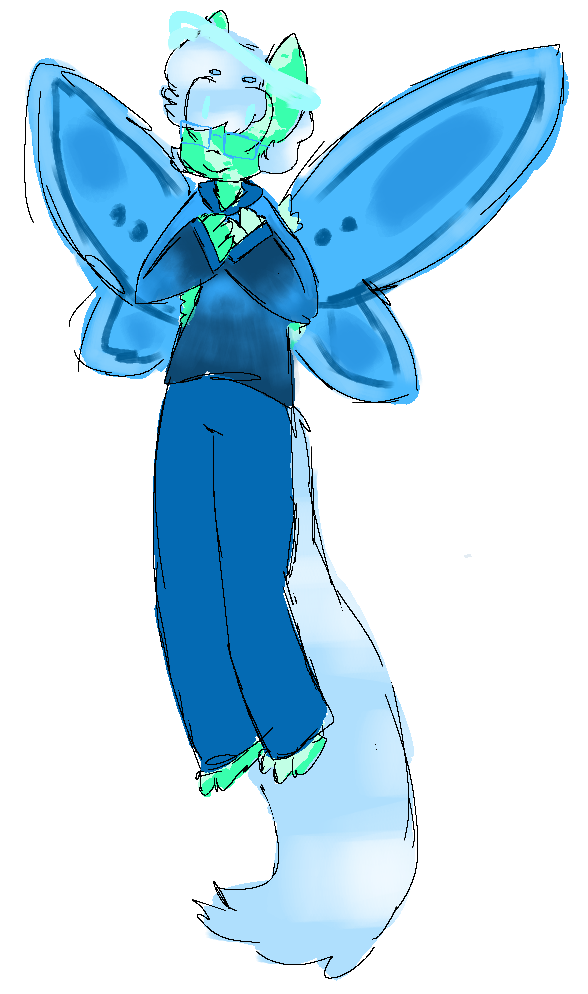 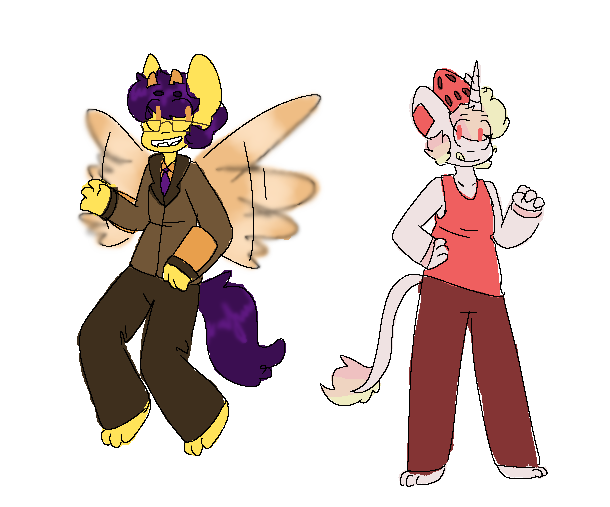