Check out the details on the latest rules update here, updated 3/28!

Provide some feedback! Should private characters be allowed in this game? Vote on this poll, ending 4/4! See the above link for more details!: https://www.strawpoll.me/42867774

Welcome to the hottest new forum game on the block, my buddy chum pals!! How does it work? Simple! Someone posts asking to see a certain kind of character, and the next poster posts IC with/links to a character of theirs who fits that description! So, for example:

Need more examples? No problem! Here's some examples of good and bad questions! Essentially, try not to get so specific or tricky that it's unlikely anyone will have an applicable story - you're not trying to stump people, you're trying to see cool OCs!:

Personality-Based:
✔️ I want to see a character who's snarky!  /  who likes puns!  /  who never gives up!  /  who's quick to fight!
❌ ...who literally only speaks to be snarky!  /  who always makes puns about weather!  /  who's so stubborn that they've died and don't even know it!  /  greets others by drop-kicking them!

Abilities-Based:
✔️ I want to see a character who controls fire!  /  with super strength!  /  who can fly!  /  who used to have powers but no longer does!
❌ ...who can control candlelight but that's it!  /  who gets their strength from artichokes!  /  who can shapeshift into a fly and ONLY a fly!  /  who lost their powers in a wacky boating accident!

Backstory-Based:
✔️ I want to see a character who's been abducted before!  /  whose past involved illness!  /  who's died at least once!
❌  ...who was abducted by aliens from Neptune!  /  who had (really specific illness goes here)  /  who's been killed by a devious kitten before!

Now, some people do have characters like this, and many of these "bad" requests are cool concepts! But they're kinda specific. If you have questions on whether your question is too specific/difficult or not, feel free to send me a PM and I'll let you know!

If you're worried, you can include a 6-hour conditional so that you can post your request without holding the thread up for too long if it ends up being too obscure! For example:

In fact, some of those "bad" requests above would be acceptable as long as a 6-hour conditional was included! It's a useful tool, so if you're even a little unsure about your request it's a good thing to include!

You can make your conditional shorter if you'd like, but not longer; if you say someone say something along the lines of "if 12 hours pass, then x works" then disregard that and apply that conditional at 6 hours as per the rules. Remember: the rules of the thread overrule a participant's post! If they get upset about it, it's on them for not having read/followed the rules.

If this thread goes on without any posts for 12 hours, anyone can go ahead and move the thread along with an entirely new request!

If you see someone violating the rules or frequently issuing requests that seem designed to trip the thread up, contact me so I can send them a warning and/or update the rules if necessary! If they continue to violate the rules, I'll block them so they can't access the thread. If you have any other questions or concerns, feel free to PM me or leave a comment on my profile!

I want to see a character who has horns!

Sadao is huge, broat and wears a mask. Doesn't hel that he rarely talks and jsut seems to stare at you. Is actually a real soft marshmallow though.

I'd like to see a character who's a being from another plane/universe/alternate reality. 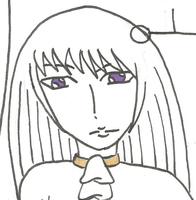 Luciel comes from an alternative universe ! He always says it was for follow his Friends but it was in reality for run away of His family UvU .

I want to see a character who has a complicated love story wity their lover !

Hey everyone, it's your pal Iso here!! I've been getting a lot of messages about things recently (like three from unique people just within the past however long I was suffering away in Fire Emblem Heroes oops,) so I'd like to mention some things!

Nothing in this announcement is intended to be targeted at any one specific user or users, these are just general issues that have come up several times from several different people throughout the thread's life, and it seems very rare that anyone's trying to cause issues intentionally! It's just time to address some things and make some new rules so the thread can proceed smoothly and everyone can have fun looking for cool OC concepts!

Some other things I'm considering for now, feel free to PM me with any suggestions you have or any issues you feel these rules + the above ones cause!:

This post will be reposted on each page (that I'm online to get to in time, that is) for the next several days to make sure everyone who uses this thread will be able to see it! 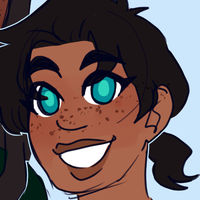 I wanna see an albino character with red eyes 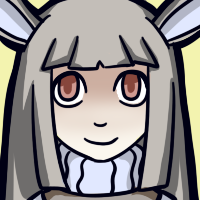 I wanna see a protagonist whose parents are alive and together. 'Cause too many protagonist have lost at least one parent. 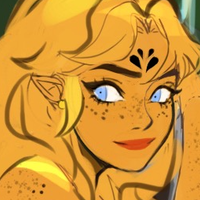 Her parents are together and happy, they've been childhood sweethearts since high school!

I want to see a character with a heart in their design! <3 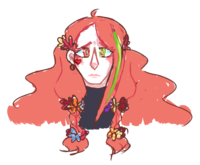 RAW has one heart on their cheek!

I want to see a tall elegant nonbinary character! 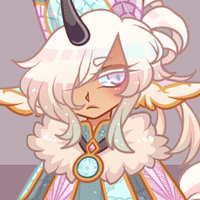 Remaelius fits the heck out of that bill!

I want to see a character whose specialty in battle is inflicting ailments! (like poison, sleep, paralysis, etc.)

I want to see an alien character who makes a hobby of watching Earth scifi. Bonus points if that character makes research of it XD EDIT: Whoops missed the word alien in there I'm dumb SKIP ME

She's not really a weeb, considering she literally is Japanese, but Kanon's still wearing her school sweater despite not having gone to school for such a long time (She's been hospitalized) Shizuki fits that role about as well as she fits in her girlfriend's arms.

I wanna see a character who is a mlm