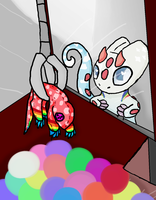 Trent and Max decided to go to their favorite pizza joint. While there, a new game gets added to the small side-room arcade! Max is excited to try it out.

Max and Trent had just finished eating at their favorite pizza place and were headed out when the doors flew open.

"'Scuse us! Comin' through!" A red Kat with long navy blue horns held the door open, while a second Kat with nubby pink horns and pale blue fur attempted to shove a huge box on a dolly through.

The manager Kat, a tiny yellow thing with almost comically long black and pink horns, watched nervously from the front desk. "Please be careful! Boss won't be happy if anything gets damaged!"

"Woah, need a hand there, guys?" Trent asked as the box threatened to topple back on the blue Kat. "Lemme give you a hand." He grabbed the front of the box and tugged. Eventually, the two managed to get the dolly through the door. The two Kats bringing it in took it further inside and parked it near the reception desk.

"Where do you want her?" the blue Kat asked. The red Kat just dug through the free mints container.

"With the other games will do," the manager said. She pointed to the small back room, which served as the restaurant's arcade. "There should be a spot near the back. The old machine used to be there years ago." With a grunt, the blue Kat started pushing the dolly.

"Well, looks like they don't need any more help. Ready to go, Max?" Trent asked, turning to his little brother. Max's eyes were wide and staring after the two Kats.

"Can't we see what they have? Oh, please, Trent!" Max began to bounce excitedly up and down.

Trent sighed and said, "Oh, alright. But no games! You know we don't have a lot of extra spending Bits."

"Yes!" Max pumped his tiny fists in the air and rushed towards the arcade room. Trent rolled his eyes and hid a fond smile and followed him, winking at the manager, who giggled.

Inside the arcade, the two Kats had already finished unloading their massive burden and were heading back out. Max bumped into the red one in his haste to see what they'd brought.

"No worries, kid. Hey, don't have too much fun in there, okay?" He laughed through his fuzzy facial whiskers and patted Max's head. The blue Kat cleared his throat.

"Let's go. Got more deliveries before we head back." The two turned and left. Max turned his gaze towards the back of the dimly black-lit room.

"Woah!" he gasped. Standing in the very back, in a dusty spot that had been vacant since the very first time Max, and even Trent, had ever come to this restaurant, was a shiny, new, glowing claw machine. Max turned his wide gaze towards Trent.

"Don't you give me that look!" Trent crossed his arms and huffed. "I just told you, no games."

"But this one is brand-new! No one has ever played it befo-" Max stopped abruptly and his already wide eyes grew wider still. With quiet awe, he stood on his tip-toes and pressed his little face and hands on the fresh glass. "Trent," he whispered, and pointed inside the machine.

With a sigh and another roll of his eyes, Trent walked over to the machine. On the very top of the prize pile was a bright pink plush Sikeri. It had pale pink spots on its body, vivid blue claws, and its belly and paws were very aggressively rainbow-colored. Trent was about to comment on how ugly he thought it was when he looked down at Max's face. The little Katragoon was completely transfixed on the small toy. Trent's heart broke a little inside his chest.

"Buddy, I know you like it, but I told you..." he started, but trailed off. Max looked down to hide the tears filling his big blue and white eyes.

"It's okay," he said, attempting to sound cheerful. "It might still be here next time." He tried, and failed, to hide a sniffle. "I'll try to save up some Bits to play."

Trent looked down at his small brother, then at the stuffed Sikeri. The thing was pretty ugly, and Trent worried about the true value of it. He knew that claw machines are just money traps, and the Sikeri's little purplish-pink button eyes and visible dark red string didn't exactly scream "quality." He turned his gaze to the small "50 Bits per game" sign. Defeated, he sighed, pulled out his wallet, and tapped Max's shoulder.

"Only one try!" he said as he dropped the Bits in Max's hand. His brother's eyes shot wide open again and he grinned from horn to horn.

Max eagerly dropped the Bits into the machine. The music roared to life, blaring an annoying jingle at them as the machine shouted encouragement in a silly voice. Trent knelt down on the side of the machine so he could see the movement of the claw front and back. Max grabbed the handles and began maneuvering.

"Further back," Trent called out. "Nah, too far. Further forward. That's it, and stop!" Trent nodded. "Should be good!"

Max confidently slammed the "lower claw" button and watched with pride as the claw dropped lower and lower. It settled gingerly down on either side of the toy Sikeri, grabbed hold, lifted-

and promptly dropped it.

"What?" Max squeaked. "You saw that! I had it!" He let his hands slide from the two joysticks in defeat. "That wasn't very fair," he whimpered.

Trent stared at the Sikeri's dumb little button eyes. Max is such a sweet kid, he thought bitterly. He never gives me a hard time with anything. He doesn't ask for much. He's a good boy, and he wants you. Trent pulled 50 more Bits out of his wallet and slammed them into the machine. "One more try," he said. Max leapt up and grabbed the joysticks once more.

The two brothers stared intensely at the claw, watching it sway back and forth. Max pressed the "lower claw" button once more, and the two glared in unison as the claw lowered, grabbed the Sikeri, lifted, and began to make its return to the prize drop slot. The two held their breath. It was almost to the drop-off when-

it slid out from the claw's grasp once again.

"Max," he said. Max flinched at his tone.

Trent left the arcade and disappeared around the corner. Max turned his gaze back to the Sikeri plushie.

"You're so pretty," he whispered. He smiled at its dorky little button eyes. "You're so cute," he told its tiny blue claws and weird mixture of colors. "You're so perfect."

"Hey, Max!" Trent called. Max turned around just in time to catch a small bag that Trent tossed his way. He caught it with a clink.

"One more try?" Trent asked, and Max beamed at him.

Max and Trent were on their way home from their favorite pizza place. Trent was walking with his head held high, trying to be calm and cool.

Max was excitedly flinging his new toy Sikeri up and down. Each time he caught it, he gave it a squeeze.

"She is not!" Max replied with his little chest puffed out.

"Yes it is a she, and she is wonderful!" He tapped a button eye. "She's good and sweet and unique."

Trent laughed and ruffled the fur on the top of Max's head. "So she's just like you, huh?"

A special thank you to EnderwingsThePony for drawing the art of Max that inspired this piece! I had a lot of fun writing it, since my two good good boys don't get a whole lot of attention. Well, Max sure does, but this was the first time I did anything with Trent. I hope you enjoyed reading!

* The two worker Kats and the manager are all just filler characters. They are in no way official Katragoons.