Because all this should be in one place

Goo aliens are obligate shapeshifters. Unconcious, they would basically have the properties of a non-neutonian fluid - rheopectic. They have limited psychic powers, which filter into both direct communications (i.e. their native language) and some control of separated mass.

Those sent on the "First Hummus Expedition" - designated as such because their first proper contact was a bit of a comedian - maintain a humanoid form while on duty due to the guidelines of the mission.

Their inner structure is rather generalized (no identifiable organs), but there are a few frequent features;
- Sky blue "skin" for those that have grown up on the inner planet Calcaei
- Medium blue mixed with light purple "skin" for those who have grown up upon the middle planet Weltra
- Light to dark purples, for thosw who grew up outer planet Iu'husid 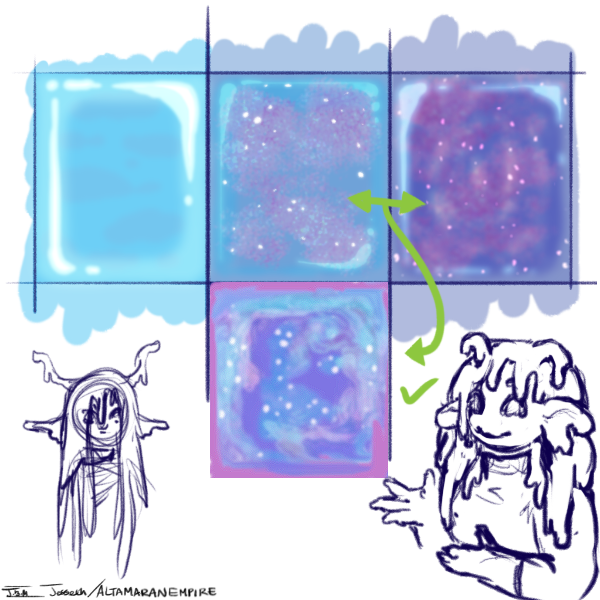 - "Freckles"/Sparkle is much more likely among terrestrial Goos. It takes years & years for these to fade.
- Weltra and Iu'husid have had a societal trend toward 2 pairs of facial tendrils/tentacles/feelers
- It takes two generations to translate from the look of one planet to another, so colors and feeler patterns can vary pretty widely.

- There is a "Royal Blue" line that was originally engineered to live on Iu'husid. Sorta-ubermensch-type thing. Teraforming was successful, though, so it's a small population.
Grerbe ( https://toyhou.se/3787630.counsellor-grerbe ) is probably the only one on the ship. Otherwise identifiable by being big. Massive. Which can translate to tall.

- There is also a "Purple" that has arisen from those that grew up in space. It's rarely a complete purple (that is, planetary shades are mixed in), because deep space missions are exclusively for going to other stars.

- 4' to 6'4" tall is common in their humanoid forms, basically mirroring human proportions, though there isn't really an obsession with being tall, or thin.

- Normally Goos are completely opaque. The primary exception is "Water sluts" - and only the extreme ones at that, which actively try and push their hydration levels. This can make them physically weaker than they would optimally be - sort of an analog to bodybuilding. 50% water by mass is "normal", 70% is extreme hydration.

- The water is also the only real way to gain weight after adulthood. And there are no children on this ship.

- Low hydration increases relative strength, at the cost of some fluidity. If there were really serious about the "human experience", more would be in this state. They aren't.

- Extremely low hydration  is a part of "hibernation" - artificially induced, most of the crew was in it during their year long trip towards Earth - without a chemical cocktail, it leads to the equivalent of full-body migranes. 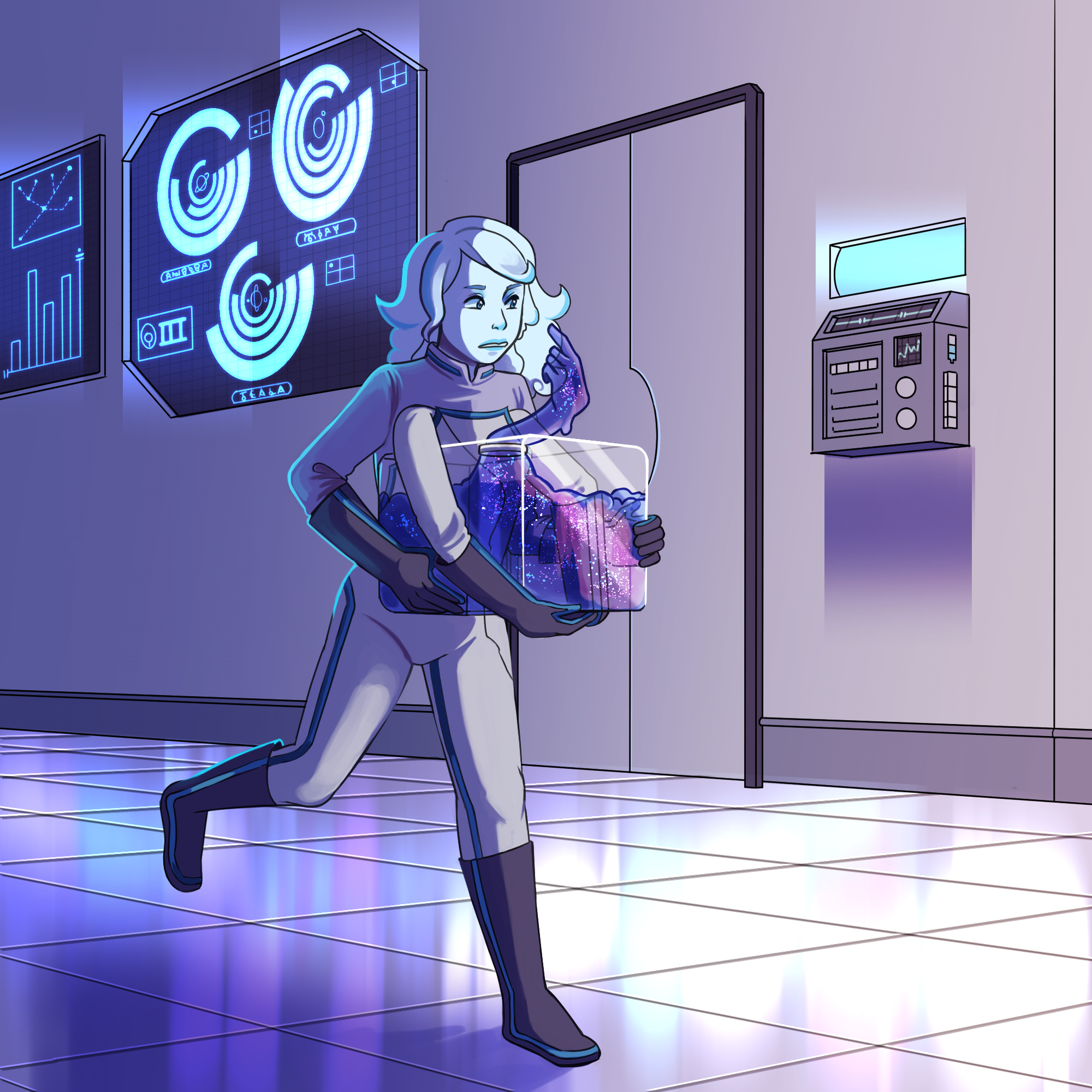 Ken'di did not mishandle this sleep pod. She's a Victim of circumstance. 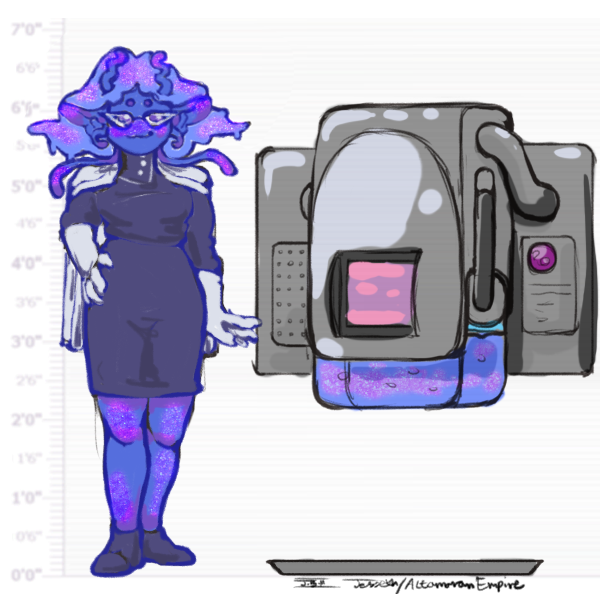 - Any "durable structures" are manufactured some way, probably 3d printed. Clothes, shoes, glasses, dentures, the sclera. For a large majority, whites of their eyes are basically a sphere with a tube cutting through it, and a tiny tentacle shoved through (not one of the fashionable tentacles).

- Since reproduction is by asexual division (there's technology. you don't just cut a goo in half and have two goos) families of 2-4 sisters are common on the homeworlds - but not on the ship.

- Their society does follow a loosely military structure, but they haven't participated in any major wars in any of their lifetimes

- Most on the ship would be considered civilians, if not scientists.

- Peyde ( https://toyhou.se/4456168.counsellor-peyde ) and those under them are essentailly military logistics. Resource gathering, food
- Grerbe ( https://toyhou.se/3787630.counsellor-grerbe ) is essentially the head scientist, and has essentailly taken over the expedition, because Earth is currently in no state to start intergalactic trade.
- Ji'esala ( https://toyhou.se/4526918.counselor-ji-esala-matrice- ) is what we'd think of as the ship captain, and would have been the Earth ambasador / diplomat had contact been made.
- As the leads on the ship, thier "Counselor" uniforms are unique to them.

- Their ship is at Earth-Sun L4 ( https://en.wikipedia.org/wiki/Lagrangian_point )

- The expedition to Earth was planned when they detected early unnatural radio signals in our direction. Since there were plenty of experiments in the 1800s, that isn't great in determining how far they've come, either.

- If you see anyone pink, that's an abducted human. A scanned mind-print on a goo-golem, low impact. Don't mind them.

- Fully crewed, the ship has 144 (i.e., 100 in base 12) persons, and a few animals that usually subsist on keeping the vents clean. While setting down on Earth is banned given Human political climate, everywhere else in the solar system is up for a mini-expidation.

- The main ship is somewhat a college dorm environment, Some are grad students, some are hall leaders, but nobody has enough space to truly isolate themselves.

- They might have expected a High Adventure trip, but they got a sitcom.