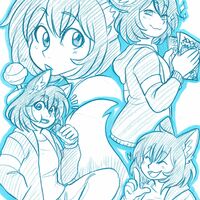 A piece about Rebecca, specifically something I put in her character profile.

It was another late spring day. Aura needed to take her car in to the dealer for maintenance, and Rebecca was all too excited to go with her.

“Wow, the cars here are so cool!” The vixen’s eyes practically sparkled as she ran around the lot looking over all the sleek new models. Aura had a bit of a lead foot, which naturally Rebecca could relate with. As a result, the two had spent a bit of time together over the past couple of weeks talking about cars, given their similar taste in motor vehicles.

After getting their fill of what the dealership had to offer, the two decided to take a break, sitting on some of the couches provided by the business and partake in some complimentary coffee.

“I know we’ve talked a bunch about cars, but what did you do with them back in your world?” Aura asked.

“What do you mean?” Rebecca raised an eyebrow.
“Well, don’t you guys have magic teleportation non-sense or something?”
“Nah, the cars are the same here as in our world.” The vixen paused. “Though, I guess we use different fuel from the uhhh lizard goop you guys use.”
Aura recognized her brother’s handiwork immediately. “Letting Shouri explain things to you guys was a mistake.”

“Anyways, before we met Shouri and Blakki, I’d take Colette’s car out for a spin every weekend, mostly out in the desert where the cops didn’t bother me.” She explained. “I put more wear on those tires than Colette ever did to be totally fair.”

Aura slowly nodded, taking in the younger girl’s words. “I’m sure you did tons of street racing in the other world, assuming you guys had that.”

Rebecca’s eyes went wide before she slowly lowered her head; her fox ears folding back as another time and place came back to her.

It was an arid summer night two years ago.

“I can’t believe we spent all day in the desert.” Colette complained, leaning on the passenger’s arm-rest. Rebecca kept her gaze firmly on the road, wearing a content smile. “I told you this would be the first thing I did when I got my license.” She countered. After a moment of silence, Rebecca spoke once more. “Thanks for letting me.”

“No problem. We didn’t break anything, or anyone. No harm done.” Colette smiled as well.

It was about ten at night, and unfortunately, they wouldn’t make it straight home. The low fuel light would come on, and not really knowing the limits of their car, Rebecca opted to stop at a local rhythm station to have the car re-charged before they continued their trek home.

Despite how late it was, there were tons of people gathered at the station they had stopped at. It was a distance out from the city proper – still in the nearby Canto All’acqua Desert. As Rebecca filled up the tank, the young vixen couldn’t help but notice the types of cars gathered around. Lots of super decked out vehicles. Custom paint jobs, lightning, and most importantly engines.

This late-night meeting was almost like a meeting of car enthusiasts. Admittedly, Rebecca herself didn’t know too much about the intricacies of how cars worked, she just drove them. These people were on a whole different level. It was obvious these vehicles were well used, but regardless of how much road time they had gotten, they were spotless. Some of the gathered enthusiasts were even showing off their engines, which had custom light jobs built into the interior of the hood. Without realizing it, Rebecca had wandered over to take a look.

She was well aware of the attention she was drawing. The vixen kept her wits about her – remaining confident as she looked over the impressive machinery on display. As long as she acted as if she was supposed to be there, she should avoid most trouble.

Colette would throw a wrench into that plan. Unlike Rebecca, who from a young age was adept at reading people and the atmosphere in general, Colette was like a semi-truck, with no tires. Just barging right in with no sense or care for the situations she was barreling into. “Why did you wander off? What are you doing?” Colette asked worriedly upon reaching her resonator.

And now things were worse. Upon realizing the two girls were even there, several of the men there surrounded the pair, looking them over like meat on display. “You two look a little young to be into street racing.” One noted. “Couple of lost little girls huh?” Another would taunt. “I can show you both a good time, won’t even play favorites.” A third man chuckled.

Rebecca gritted her teeth, while Colette clung to her resonator’s back. “What are you chuckle fucks doing?” A gruff, female voice spoke up. The small crowd that gathered around the two young girls parted. An older woman stood amongst the sea of men. There was an air of authority to this mysterious woman. Her distinct horns and dragon tail adding to her powerful aura.

She looked Rebecca over in particular, then her line of sight trained up at their vehicle which sat by the charging station. A smirk rose on the woman’s lips. “So that was you then.” She spoke, amused.

The fire resonator gulped. She wasn’t entirely sure what this woman was talking about. Rebecca provided no answer, remaining quiet, but holding a defiant glare.

“I saw your machine out in the desert earlier. It’s new, green like you.” The dragon-woman commented. This earned some chuckles and quiet taunting from the surrounding men. Rebecca’s ears twitched, souring her mood further. “How about we help you break it in?” She offered. The vixen raised an eyebrow.

“You can join our race tonight.” The older woman clarified. “Unless you’re afraid you’re gonna lose.”

Rebecca wasn’t normally one to take obvious bait such as that, but the whole situation was so out of her wheelhouse she disregarded common sense and spoke up. “Fine, should be fun.” She grinned toothily. “W-wait, Rebecca we can’t!” Colette yelped. Rebecca’s glare was broken as she looked back at her terrified maestro. Rather than concern, she looked disappointed. The orange-clad vixen hung her head. She opened her mouth to reject the offer, however the dragon-woman spoke first.

“Oh, the little whipped fox is too scared to race.” Immediately the group burst into laughter, reigniting the fiery rage Rebecca had felt earlier. “You’re on!” She shouted over the group. The laughter stopped as the crowd fell to silence. “Well, guess we have another car in the race tonight then.” The woman nodded, wearing a thin smirk.

And with that Rebecca and Colette returned to their car. The maestro sat fearfully in her seat, gripping her seatbelt tightly as her resonator adjusted the mirrors and checked the gauges.

“We’re really racing them?” Colette finally mustered up the courage to speak.
“Duh. Not letting them get away with that.” Rebecca growled.

Colette gulped, but didn’t say anything further. With the lack of any protest, Rebecca started the vehicle and followed the group of cars to the starting line they had made. As they waited with the other cars, one of the men from earlier tapped on the driver side window. Rolling the window down, Rebecca mustered up a nasty glare to greet the man.

“We’re racing to the old factory just on the edge of town.” He told her. She simply nodded in response. With that the window was rolled back up. At least it was somewhere familiar. The pair sat in their idling vehicle in silence. The radio was kept off, the AC kept low, the car simply sat in place, the engine purring like a kitten as it awaited the work it was about to put out.

Minutes passed, several people wandering around. Finally, the stragglers cleared the road, leaving only the cars idling away. The nearby engines began to pick up volume as the other racers revved up their cars for the starting flag. Gripping the steering wheel tightly, Rebecca narrowed her eyes focusing on the road ahead. Colette gulped, grabbing the handle that was just above the door.

As soon as the flag was dropped, the cars all took off in an impressive show of smoke and tire squealing. What probably surprised the other drivers though was Rebecca being able to keep up with them. The first stretch of the race was down a straight line of road. The cars in front traded who was first in a pretty organized fashion. Rebecca wasn’t able to find a way through, but she was keeping up, no doubt annoying the group of racers. Colette couldn’t look at the road blazing past them, her focus was on the speedometer which was rapidly approaching the furthest point it could go. The cars approached the first turn in the road, which they began to move about to take the corner.

There was something Rebecca had quite a bit of practice doing, which would no doubt surprise them. While the group of racers drifted around the far edge of the corner, expecting Rebecca wouldn’t know how to handle that maneuver, the young vixen sped up further and cut the corner hard, managing the hand brake and her acceleration as she drifted the inside corner. She floored it as she maintained perfect control of the car coming out of the turn, taking the lead. The girl smirked confidently as she glanced up at her opponents trailing behind her in her rearview mirror.

However, they rapidly caught up with her and were right on her tail coming into the next turn. It seemed though, they weren’t going to let her get away with that. As she began to drift into the next corner, one of the other cars hit the tail of her car, causing Rebecca to lose control of the vehicle. As she had never had that happen before, the newly licensed driver overcompensated, causing the car to violently veer off the road and straight into a nearby shrubbery, both girls screaming during the entire event.

With the vehicle stopped, Colette broke down and cried loudly. Rebecca sat in shock, her knuckles white from how hard she was gripping the steering wheel. She trembled as tears gathered in her eyes. “I-I’m so sorry Colette.” She managed to squeak out.

“L-Let’s just go home Re-rebecca.” The maestro whimpered, having had enough of this.

Rebecca looked around quickly, back at the dealership. Aura drew her hand away from the other girl’s face. “You okay? You kinda zoned out there.”

“Yeah… I’m fine.” The vixen brushed her bangs back with her hand, wiping away some sweat that had gathered on her brow.

“No, I don’t street race – not a fan of the type of crowds it draws.” The resonator finally replied to Aura’s previous statement.

“Ah that’s fair. Maybe I can take you up some of the mountain roads we have around here, they’re pretty fun.”