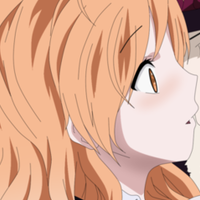 A small collection of stories I wrote about Roxie and her boys back when there were... less of them. Names Redacted or changed.

Roxie is my longest standing OC from a very young age under a different name. When I was about 9 years old, she became herself in this current form and has been with me ever since. When I was younger, I had decided that Roxie would choose one of many boys, but that group ended up becoming a full on harem and Roxie became Poly far before I knew what that meant. Roxie is not meant to be in a realistic world and she stands for the freedoms we have as children to create without the limitations of what's realistic or acceptable.

Because of the nature of her character, I'll be censoring almost all names and defining characteristics to simple words or phrases that are significant. Some will just not be named.

NOTE: These stories were mostly written in 2012 about her time first moving in. They are not well-written and many of them were cut. Any with unclear plot will have notes at the top to clarify.

The story begins in 2004/5. Twelve-year-old Roxanne Sapphire Matalic had just completed her two year long journey from her small town, finally re-uniting with her older brother, Tom. After almost a year of being apart as rivals, the two of them come together to bid her former team farewell. Tom surprises his little sister with the chance to finally settle down in another small nameless town. Roxie and her brothers end up moving in to giant communal home, Creatively called "The Mansion". Many kids their age already reside there, some of which are familiar faces to the seemingly shy Roxie who has come to love and idolize them. Unfortunately, things aren't as they seem as former friends live apart and Roxie is left unable to interact with anyone without dramatics.

The story has been a day-by-day ongoing story about Roxie and her adventure in the Mansion. Roxie remained twelve for two years, making her 23 or 25 today.  The entire story revolved around living in the mansion up until 2011 when Roxie moved with her boys with her first child. Her story continues with her massive harem and too many kids.

True Love: In this universe, the term "True Love" is another relationship phase. It is the stage in between a relationship and engagement.

This is NOT Roxie's full harem lol. Not even close.

Aka: Roxie's first love. She's made sure he was her first everything, even though the others weren't well behind. The two of them were first to get married though he made sure he was the last of the original harem to propose. He's quiet and soft-spoken but always tries to get his way. He cares deeply for his friends though he doesn't like to show it.

Yang: Roxie's second love and rocky relationship. Briefly dated his childhood friend with Roxie's knowledge which caused the two of them to have issues later down the line. Though he's friendly, he gets frustrated when he doesn't get his way. Roxie and Yang almost broke up on a few occasions.

Mizu: Roxie likes to imitate Mizu to reflect her own personality. The two of them are technically foster siblings, though they only stayed together for a few weeks. Even though the two are romantic, Roxie sees his parents as her own and looks to them when she runs away. Even though he's relatively calm, he struggles with trying to help Roxie, causing it to effect him the most.

Tempest:  Out of all the members in her harem, Tempest and Roxie are the closest. They had gone through hell together and back. She relies on him heavily for support which he happily provides. Tempest is the most concerned for her and often finds ways to make sure she's okay. He carries an inhaler for her even when she doesn't need it. He was the first of the harem to propose. Roxie ships him with Aka even though they're just best friends.

Kawa: One of the last members of Roxie's harem and a dangerous creature of the lunar occult. He and Roxie had a secret relationship until he decided that the secret was too much for her and ended it. They re-united months later. As of 2018, he lives with the family and remains her boyfriend.

Dark: Kei's best friend. He met Roxie when she was on vacation. Their relationship was relatively subdued until she discovered his addiction and smoking which caused Roxie's bipolar symptoms to surface. The two became close as a result.

Kei: Dark's best friend. Often drew on his arm through high school. He and Roxie are close after she learned of his addiction.

Blue: Friends with Dark and Kei and also struggled with addiction in his teen years that helped him and Roxie become close. Roxie teases him for being one of her only North American love interests. He's arrogant and relatively hot headed.

Stephanie: A member of the rival group who befriends Roxie early on. She's a popular actress and singer. Affectionately dubbed "Annoying Popstar #1" by Roxie.

The Rivals: Made up of a traitorous group of rather normal people. Included Aka and Steph They were demonized by Tempest and Yang and Roxie eventually befriended them after avoiding them for long. At least one of them joined Roxie's harem. Roxie begged those who lived at the mansion for them to stay.