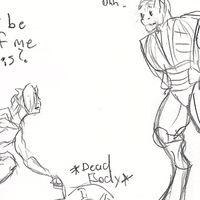 a short one-shot involving a concept between Talon and Petrru, talking about life, death, and personal accountability.

(for context, these exchanges would be taking place in Petrru’s language. Petrru’s formality is both an effect of the cultural use of the language and also Petrru is more formal or 'traditional’ in language than others. By contrast Talon’s grasp of the language would sound very 'youthful’, like using slang, and would come across as disrespectful out of context. Talon has an at-least intermediate grasp of the language.)

The bodies that had been killed in the skirmish had been placed  carefully, laid out on their backs, scraps of fabric laid over their  eyes as Petrru had dictated was appropriate in their culture. Not quite a  burial, someone else would see to that once this conflict was sorted,  but show of dignity and ritual before burial could be carried out.

Talon knelt beside the bodies in somber thought. One by one, she  found what they used for their tags and recited the names in her head,  one by one, a practice she had familiarized herself with from her time  in the civil war. As she was passing the bodies, upon one she spotted  the stark white of a protruding scrap of paper, which she carefully  removed. It appeared to be a letter, most of which she could translate  but much of the cultural specific references were lost to her. She was  able to discern it was a received letter, not one being drafted, before  she heard Petrru’s footfalls returning in her direction.

"Inspecting the bodies for any particular purpose?"

"Yes?" She answered with a question, not sure how to explain herself  just yet. She stood to her feet, the letter in hand, eyes fixed on the  spot she couldn’t quite understand.

"Could you read this for me?" She presented it to Petrru, a claw  rested upon a phrase she could theoretically read, but the way it was  used made it difficult for her to understand.

Petrru cast a stare at Talon for a moment but said nothing, and turned his attention to her claw on the paper.

"Ah, Eventide, when used in this manner it is in reference to a  festival that is celebrated by much of those within the southern  hemisphere."

"So I did read it right," Talon spoke this to herself, "Thank you, I  wasn’t entirely sure what it meant." With that Talon finished her read  of the letter folding it back up carefully to return to the body.

Petrru watched Talon’s movements in quiet contemplation, Talon could  feel some amount of unease but couldn’t exactly place why. Though  admittedly it probably didn’t look good to sort through the dead bodies  after she asked if she could eat them only a few hours ago.

"May I ask you a question. I mean no ill judgement but I cannot  prevent myself from viewing you unfavorably unless I inquire upon your  actions further."

Talon rose to her feet after placing the letter back. "Please ask,  I’d rather explain myself than leave you with a bad impression."

"I am not certain how to put this as I do not mean this as any  insult," the crease of his jowls seemed to increase as he thought on his  words. "but as you were before I saw you as irreverent with the dead.  You care little for their bodies, for burials, eating them like prey,  but you appear to be more reverent with their effects, a thing that is  not alive nor housed in their soul, why is this?"

Talon glanced at the body she had just disturbed, mulling over how to word her feelings in Petrru’s language.

"The body is not alive, it has no need for the meat on it’s bones, it  will decay and it will feed the earth, so I don’t see why I can’t use  it to feed myself instead. But as for their property." She paused again,  taking stock in the choice of words. "They keep memories, they tell a  story that they no longer can. I can learn who they are, what they were.  I can learn their names."

Some of the sourness of Petrru’s posture eased, his head tilted in  one of curious confusion. "What significance would their names be to  you? Is there someone among them you may know?"

This time, Talon’s pause was one of quiet reflection, not of that day but of many days past.

"No, there is no one I know, but I think it is important that I learn  who they were. Every life I take, was once a life. A whole and  complicated being that had thought, feelings, and dreams; that had  friends, lovers, and family. Even if they chose what led to their death,  even if they knew the consequences, I am still the one that ripped that  away."

Talon knelt down amongst the bodies, staring at them. "It’s easy to  convince yourself these lives are.. Other. That they brought this upon  themselves, that they had the choice to leave, but I think that is  running away from the consequence of my actions."

The talk of death and her being the cause made her recall the  skirmish that resulted in the bodies before them. "It’s so easy to kill.  There’s a craving to kill. A rush, an insatiable need that awakens with  the first draw of blood that can consume me if I let it. It’s so-"  Talon rose to her feet again, but her face stared at the ground, her  mind full of words in her language wanting so much to convey just how  overwhelming the feeling was but instead she shook her head, clutching  her fists and allowing that memory to pass. "The only way to not fall  in, is to remind myself what I’m facing is not just things to feed my  fire, they’re people."

Talon lifted her gaze again in Petrru’s direction, then motioned to  the bodies she had surrounded herself with. "For that reason, for every  life I take, I find it important to remind myself in any way I can that  they had names they were alive, and their lives are something I will  have to answer for.  I don’t want to ever want to forget that."

Through the course of her explanation, Petrru’s features had  softened, whatever potentially unfavorable judgement he had of her  before, seemed to have faded.

"While some of your perspective regarding the bodies I do not agree  with, I am relieved to learn you do indeed have much more reverence for  the dead than I had first been concerned for." Petrru glanced over the  bodies on the ground. "I do not find many soldiers at your age, or at  any age, to have reverence for the ones they fell on the opposing side.  To remember that the opposition they face is, in many ways, are just as  alive and deserving of life, as they are."

Talon shrugged, stepping away from the bodies now that her point had  been made. "I was in a unique position, I think it helped me learn that,  a lot sooner."

"I do not know all of your history, but if you are a child of both  sides, I suppose it does not surprise me that you would be adapted to  experience life in two worlds."

"That has a lot to do with it, I won’t lie." Talon nodded reflexively  even if it meant nothing to Petrru. "But that’s all I wanted to do  here."

Talon walked past Petrru, but was stopped by a heavy hand on her shoulder.

"As important as your practice is, to you and those connected to the  lives you have taken, please be mindful to not let it overwhelm you."

Talon glanced up at Petrru, though his face appeared as it always did, something about his eyes seemed soft.

"Do not hold the weight of their lives for the whole of your own. It  is good to empathise and be reverent of the power you have over the  lives of others, but not at the expense of your own life. Finding that  balance between responsibility, and your own forgiveness, is important."

The words of advice were unexpected, and hit something she had been  quietly keeping to herself for a long time, and something she had been  at odds with herself about. Both parts of her in disagreement over if he  was right or not. Was it really in her right to forget those lives she  carved out, maybe that was the price to pay for what she was. But maybe  she did deserve to go easy on herself. With her head still in conflict,  all she could muster was a "Thanks", before walking off.